Salem, IN (October 28, 2019) – Mandy Chick just wrapped up her second full-time season of competition with the JEGS/CRA All-Stars Tour Presented by Chevrolet Performance, finishing second in the Chase for the Championship after the series Season Championship event at Winchester Speedway on Saturday, October 12th. Chick had a good season with the series, she was tied with 2019 series Champion Dan Leeck with the most top ten finishes in the series with seven and was second to Leeck in most completed laps.

The team had some events where they struggled and had some on track issues, but the team never gave up, whether it was making adjustments before a race or having to make adjustments or repairs during an event, with Chick making improvements at nearly every event. For their hard work and never give up attitude, the Team Chick Racing team has been named the JEGS/CRA All-Stars Tour 2019 Pitboxes.com Pit Crew of the Year Award winners. The team led by owner Steve Chick gave 100% each week and more, to keep Chick competitive at each series event and went way above to win the Pitboxes.com Pit Crew of the Race Award twice during the 2019 season, the most of any team in the series.

The team got its first Pitboxes.com Pit Crew of the Race Award at the Birch Run Speedway season opening event on May 18th, were the team pulled their car out of impound after qualifying 19th to make adjustments and get the car better for Chick to drive. Mandy than drove from the tail of the field for pulling out of impound, to a ninth-place finish. 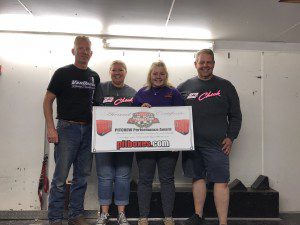 The team got its second Pitboxes.com Pit Crew of the Race Award at the Season Championship event at Winchester. Chick was involved in an incident on the opening lap of the event when a car bounced off the wall and got into the rear end of Chicks car. Chick’s car had body damage to the rear. The team came down pit road and made hasty repairs before the next restart, as well as making a couple more pit stops during a couple other yellow flags to keep her on the track and racing for a Championship.  Chick would finish in seventh, one position behind Leeck, thanks to the efforts of her team.

“I am so proud of all the hard work my crew guys put in this season and for them to get recognized with this award,” remarked Chick. “It really is a team effort, and I am so thankful that my Dad, my Mom, my Grandpa, Josh Nelms, Bill Rud, Mike Huffman, Brian Brown, Garrett Dies, and Roy Dies work so hard at the track to get us where we want to be. Besides their crucial help at the race track, we have several crew members who work in our race shop to help us prepare the race cars for each race, and we also appreciate the behind-the-scenes help from VanDoorn Racing Development and RW Race Engines to make sure our equipment is in tip-top shape! Thank you to PitBoxes.com for supporting the JEGS/CRA All-Stars Tour with this great award.”

For earning the JEGS/CRA All-Stars Tour 2019 Pitboxes.com Pit Crew of the Year, Team Racing will receive a $1,000 Product Certificate from Pitboxes.com at the 2019 CRA Awards Banquet, which will be held at the Crowne Plaza Indianapolis at Union Station on Friday, January 3rd.

“We really appreciate Ricky Sanders at PitBoxes.com for coming up with this great award,” remarked Glenn Luckett, Managing Partner with CRA. “Ricky wanted to create an award that recognized the people behind the drivers in our series. The drivers get recognition at each race, but with the Pitboxes.com Pit Crew Awards for each series event and the season, a lot of the hard working crew members for the JEGS/CRA All-Stars Tour teams get recognized also.”

Luckett added, “The Team Chick Racing team worked hard to get their cars to the track and prepared for each race, but they also had a never give up attitude, no matter what happened to their cars in a race, they would work their butts off to get their cars better or to just get them back on the track to complete laps. We appreciate all their efforts this season!”

ButlerBuilt to Continue Sponsorship of CRA for 2017