Salem, IN (October 14, 2019) – Shirley, Indiana’s Jason Thompson came into Saturday night’s Van Hoy Oil CRA Street Stocks Powered by JEGS event at Winchester Speedway with just one goal in mind, and that was to get the win at his favorite track. He accomplished that by leading all 40 laps of the event.

“I’m really happy to get this win and at this track,” remarked Thompson in victory lane. “This car has a ton of laps on her, but we came here with one goal, to get another Winchester victory and we did it. I have to thank my dad and my crew for all their hard work on the car and helping me this weekend. We got lucky with the invert to start on the front row and I knew if I could keep it out front and not make any mistakes, we could get the win and we did it! I love this place, it’s a blast to race here!”

Thompson grabbed the lead from his outside pole starting position after Allstar Performance Fast Qualifier Jeff Lane drew a seven for the events inverted start. Thompson and pole sitter Phil Jenkins battled side by side for the lead, but Thompson used the high groove to move out front. While those two battled for the lead, drivers were battling hard behind them for positions, especially the four Chase for the Championship drivers, Jason Atkinson, Jacob McElfresh, Andrew Teepe and J.J. Schafer.

The red flag came out on lap 10 when Danny Adams spun on the backstretch and made contact with the outside turn three wall, his car then flipped over and slid down the banking on its roof when the car suddenly burst into flames. The Winchester safety crew quickly extinguished the fire and where able to turn the car over and get Adams out. Adams was okay, but his car could not continue.

Thompson kept the lead on the restart as Jenkins, Atkinson, Lane and McElfresh all battled for top five positions. McElfresh and Lane worked their way to the front as Atkinson’s car started to fade. A late caution then flew for a stalled car at the entrance to pit road setting up a two-lap battle to decide the win and the series Championship. 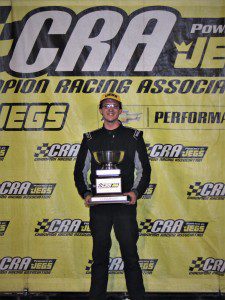 The 2019 CRA Awards Banquet Presented by Shepherd Insurance is next up for the Van Hoy Oil CRA Street Stocks on Friday, January 3rd, 2020 at the Crowne Plaza Indianapolis Downtown at Union Station.