Salem, Indiana (November 13, 2019): Inaugural Victory Custom Trailers CRA Junior Late Models Champion Chase Burda will be moving up to compete with the JEGS/CRA All-Stars Tour Presented by Chevrolet Performance in 2020. The 14-year-old Michigan native had a very impressive season with the Victory Custom Trailers CRA Junior Late Models, getting six feature wins in the series eight events, including a stretch of four wins in a row in the series second event through the series fifth event. Burda had five heat race wins out of the seven events that featured heat races and was the MPM Marketing Fast Qualifier at seven of the eight events. Burda won the series Season Championship event at Anderson Speedway on September 28th to claim the series inaugural Championship.

“It was an awesome feeling,” remarked Chase Burda. “I was really nervous that day, even though I had a lot of confidence coming into the event. I was Fast Qualifier, then played it safe in the heat race to make sure nothing happened. I started second in the feature, once I got the lead, I wasn’t nervous anymore, just focused on hitting my marks and not making any mistakes. When Katie (Hettinger) spun towards the end, I knew that would bunch the field back together for a restart, but I was able to take the lead back and when I saw the white flag, I knew I only had a lap to keep my composure. I was shaking when I got to the checkered flag. My sister, Courtney was there when I climbed out of the car and hugged me. I was so happy! My dad and I had a goal this year to win the CRA Junior Late Model Series Championship and we did it!”

Burda also competed in an IMCA Dirt Modified during the 2019 season, his second season competing on dirt. Burda was named Rookie of the Year in the Dirt Works Eastern Region and became the youngest IMCA Modified driver to earn this award since its inception in 1993.

“As his parents, we are over the moon proud of Chase,” remarked Rob Burda, Chase Burda’s father and car owner. “He sets his goals and goes all in to achieve them. We cannot wait to see what his future holds. He is an incredible driver on both pavement and dirt.” 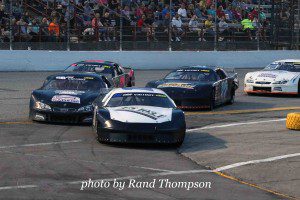 Chase Burda added, “I have to thank all my sponsors that helped us reach our goals this year, Rob’s Service, Finish Line Auto Sales, Express Auto Graphics, Super Flight Oil, Energy Release and U.S.103. I want to thank Chris and Jessie Hettinger for the Jim Hettinger Memorial Race at Toledo, Jim was a big fan of my racing from the beginning, he did a lot to help to help me in my racing career. I would also like to thank Victory Custom Trailers for sponsoring the series, CRA for starting the series and VanDoorn Racing Development, without any of them I wouldn’t have had the opportunity to win the inaugural CRA Junior Late Model Championship.”

Burda will be racing in a VanDoorn Racing Development Chassis with the JEGS/CRA All-Stars Tour in 2020, competing for the series Championship and Rookie of the Year honors. The team will also have new Chase Burda Motorsports colors in 2020 that will be revealed soon.

“I’m real excited about the upcoming 2020 season and moving up to race with the JEGS/CRA All-Stars Tour,” remarked Chase Burda. “There will be many new challenges in 2020, I haven’t raced very many 100 lap features and there will be a lot of competition in each race, but I am confident we will be up for those challenges!”