Salem, Indiana (November 8, 2019): 12-year-old Dryden, Michigan native Katie Hettinger has officially announced that she will return to compete with the Victory Custom Trailers CRA Junior Late Models again in 2020. After a very successful inaugural season, the series is looking forward to an even better second season. The Victory Custom Trailers CRA Junior Late Models was a new racing series in 2019 to focus on a youth movement for short track stock car racing designed for 10 to 15-year-old drivers to compete amongst themselves for both experience and recognition in full size late models with an economical drive train and suspension alternatives.

“I am going to be coming back and race with the Victory Custom Trailers CRA Junior Late Models in 2020,” remarked Hettinger. “Johnny and Butch VanDoorn are putting a new car together for me to race with in 2020. I’m really excited to be able to race this series again, this series is a great opportunity for young drivers. 2019 went really well for my first season in a late model. I had fun racing with all the boys and I’m ready to do it again in 2020!”

Hettinger was the only female competitor to race in the series inaugural 2019 season, a season that saw her holding her own with boys from 11 to 14 years old at each event. Hettinger picked up a heat race win in the series inaugural event at Birch Run Speedway on May 18th. Her best feature finish was a third-place finish in the Birch Run inaugural series feature. Hettinger was battling in the top three on the last lap in the series feature event at Corrigan Oil Speedway on August 16th and looked to be on her way to a possible best series finish when she was involved in a turn four wreck as the cars came to the checkers. 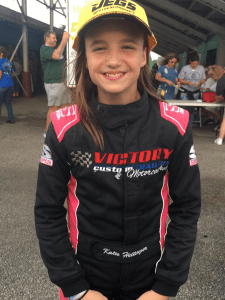 Hettinger added, “One of my goals for 2020 is to qualify for the Chase for the Championship and be in the final three drivers to race for the Championship. Also, I hope that the 2020 race season will be a better season for me now that I am more familiar with the class and the tracks. I would like to thank my sponsors for a great season in 2019 and for supporting me again in 2020: Victory Custom Trailers, PxP Racewear, Race Face TV, Turn One Steering, HD5 Graphics, and my newest sponsor, VanDoorn Racing Development!”

After a very successful inaugural season, CRA officials are already hard at work on the series 2020 schedule and making minor adjustments to the 2020 rule package for the series. Both the 2020 schedule and the 2020 rules package will be released soon. New teams wanting to compete with the series in 2020 need to submit a Driver Resume, that form is available on the CRA web site under the Junior Late Model tab.

Brian Campbell is making the trip from the Wolverine State to the Peach State for CRA SpeedFest this weekend with... read more