Salem, Indiana (December 19, 2019): Carson Lucas Racing has announced that they will compete with the Victory Custom Trailers CRA Junior Late Models in 2020, for the series Rookie of the Year Award and Season Championship, with 11-year-old Proctorville, Ohio native Carson Lucas behind the wheel. The Victory Custom Trailers CRA Junior Late Models was a new racing series debuting in 2019 to focus on a youth movement for short track stock car racing designed for 10 to 15-year-old drivers to compete amongst themselves for both experience and recognition in full size late models with an economical drive train and suspension alternatives.

Carson has been racing dirt oval karts since the age of four. He has competed on a local, regional and national level; competing in two karting series (NKA and AKRA) and two tire series (Burris and Maxxis) across the Midwest and Southeast. His career stats have him with over 60 wins and four championships. In 2019, Carson brought home a Midwest Championship with 10 poles, eight feature wins, 26 top five finishes and nine additional top 10 finishes, at 18 different tracks against the best Junior Kart drivers and teams in the country. 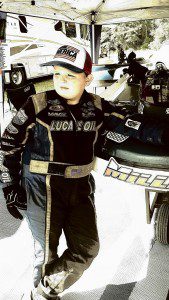 For 2020 Carson will compete for the first time in a late model with the Victory Custom Trailers CRA Junior Late Models and will still compete in an AKRA Dirt Oval Kart across the breadth of the Midwest when not racing with CRA. Lucas Oil Products will be Carson’s primary sponsor on both his Junior Late Model and for his Kart racing. Carson Lucas Racing is excited for this new opportunity for their driver and the team.

“I’m ready to feel how a big car handles in the turns and use what I have learned in my go kart and simulator’, remarked Lucas. “I have already met so many drivers and everyone has been really awesome. I hope to learn as much as I can and be able to maybe have a Mountain Dew celebration or two this season!”

After a very successful inaugural season in 2019 with the Victory Custom Trailers CRA Junior Late Models, CRA officials have recently announced the series 2020 schedule and the 2020 rule package, both are available on the CRA web site. New teams wanting to compete with the series in 2020 need to submit a Driver Resume, that form is available on the CRA web site under the CRA Junior Late Model tab.