Special from Speed51.com – Brian Campbell does not make a habit of traveling outside the Midwest to race anymore, preferring to stay close to home. One trip that he did make recently was to CRA SpeedFest in Georgia last January, a trip that he will make once again this weekend for the second year in a row.

After an eight-year hiatus from the event, Campbell made his first SpeedFest start since it moved to Crisp Motorsports Park one year ago while his native Michigan was experiencing heavy snow and record-breaking cold. While winter has not been nearly as brutal in the Wolverine State this year, Campbell is still just as excited to get back in the car for the first time since the Glass City 200 at Toledo Speedway back in September.

“Well it’s good to not see snow, how about that? We’re looking forward to it. We leave out of town tomorrow [Wednesday] and we can’t wait to get down there and get back in the car,” Campbell told Speed51.com. “It’s been a few months, let’s have some fun.”

Campbell started second and led early in last year’s race before a spin set him back, ultimately finishing in eighth after 200 laps. While not getting the final result he desired, he quickly became comfortable with the 3/8-mile oval.

“The driving style really suits me compared to the tracks up here. It really mimics the tracks up here,” Campbell stated. It’s really the setup of the car and to come out of practice a little bit more prepared than maybe what we were last year.”

Campbell sees SpeedFest as a chance to race with some of the best in the country that he normally wouldn’t see during the rest of the year.

“This is one of the races that everybody from the south goes to, but not a lot of people from the north go to,” he said. “It’s fun, it’s kind of a medium ground where we don’t have to go all the way down to Florida and they don’t have to come all the way up to Michigan; we can just meet in the middle and go race. It’s always fun to race the southern dudes, that’s certainly where the majority of the talent seems to be laying lately and it’s fun to race with them.”

Last year saw Campbell win two ARCA/CRA Super Series-sanctioned races, including the Money in the Bank 150 at Berlin Raceway for the second year in a row. Already the all-time winningest driver in JEGS/CRA All-Stars Tour history, he sits just two wins from tying Scott Hantz as the winningest driver in Super Series history. With a chance at history sitting on the horizon for the 2020 season, the record is not on his mind.

“Our goal at every race is to go win and that’s how we have fun. We go win the races and we have some fun. If we don’t win, we’re not having fun,” he stated. “If we win and we do what we supposed to do, that record will kind of just take care of itself. It’s not thinking all that much about that as it is more just going out there and focusing on what we have to do and win races and have fun while doing it.”

A win at SpeedFest this weekend would put him within one win of the all-time record. With it as well is an opportunity to start the year off strong and cross a race off the bucket list.

If you can’t make it to CRA SpeedFest in-person, click here to purchase your Speed51 pay-per-view video ticket today.

The postponed Fly Over States 150 at Winchester Speedway has been rescheduled to the Kingof the Highbanks presented by JEGS... read more 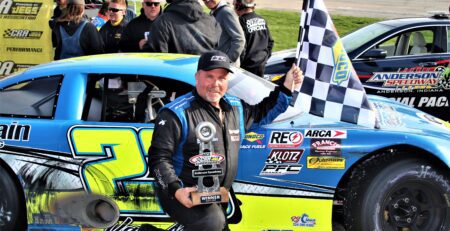