The series will begin its 2020 Chase for the Championship on Sunday, 2020 will be the fourth season the series has used this playoff style format to crown its Champion. The second event of the Chase will be at Lucas Oil Raceway on September 20th, the third event of the Chase will be at Anderson Speedway on September 26th with the final Championship event on Saturday, October 10th of Winchester 400 Weekend.

Leading series Rookie Tanner Jack was the regular season points Champion and is locked into the final four drivers who will race for the series Championship, as long as he competes in all three Chase events leading up to the Championship event. The other drivers earning the right to compete over the next three point events to be in the final four drivers to compete for the series Championship on Winchester 400 weekend include Raintree 100 winner Austin Coe, 2007 series Champion Billy Hutson, Kent Carson, Cassten Everidge, Ronnie Rose, 2018 Van Hoy Oil CRA Street Stock Champion James Kirby and former CRA Street Stocks regular Daniel Adams.

There will be early hauler parking available on Friday from 6 to 8pm. Pits open on Saturday at 11am. The first of three rounds of practice for each division racing this weekend will begin at 1:30pm, the third practice session will also be group qualifying for each division. Racing begins on Saturday evening at 6pm and will include a Fastest 5 Dash for the Vore’s Welding CRA Late Model Sportsman five fastest qualifiers with the winner getting $200 from Gary Crossgrove Painting.

Pits open at 10am on Sunday. Warm Up Sessions for all divisions will begin at 12noon. Racing will begin at 2pm and will include the 75-lap feature for the Vore’s Welding CRA Late Model Sportsman. Also racing on Sunday will be the Van Hoy Oil CRA Street Stocks in a 75-lap feature, the Mt. Lawn Speedway Modifieds, Crown Vic’s, Pro Compacts, Stock Compacts, and Thunder Roadsters.

More event and track information can be found at www.mtlawn.com.
For more information on all the CRA series go to www.cra-racing.com. 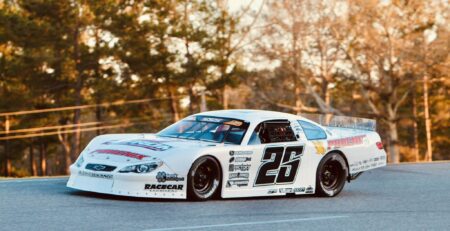