Salem, IN (January 11, 2021) – Wisconsin racing legend Rich Bickle has officially announced that he will begin his last season of stock car racing at the upcoming CRA SpeedFest 2021 at Showtime Speedway in the ARCA/CRA Super Series 200 lap event. The prestigious early season event will be held on Friday, January 22nd and Saturday, January 23rd, with Sunday January 24th as the events rain date.

Bickle, who will turn 60 in May, has traditionally driven car No. 45 throughout his career. 2021 will mark his 45th year of racing and he had previously announced 2021 would be his last season of racing before he officially retires from the driver’s seat.

“I’m looking forward to starting the asphalt racing season down at SpeedFest and Showtime Speedway,” remarked Bickle. “I think I may still have the late model track record down their from the late 80’s. I hope we can start my final season of racing off with a win, we were fast last year, and I expect to get to victory lane this season. If I can get a win that would be five decades that I have won a race in, not a lot of people can claim to have done that!”

Bickle has won hundreds of short track races, including the top Super Late Model event in the country, the Snowball Derby, a record five times. Bickle made 85 NASCAR Cup Series starts, 54 NASCAR Xfinity Series starts, and 79 NASCAR Camping World Truck Series starts, were he got three wins, all in the 1997 season. In recent years, Bickle came back to short track racing making several starts in his home state of Wisconsin and in the Midwest. Bickle won a Snowmobile race this past weekend in Wisconsin and will be testing an ARCA Menards Series car at Daytona Speedway this coming weekend.

Bickle recently released a book titled ‘The Barnyard to the Brickyard, the Rich Bickle Story’, which details his beginnings in racing through his highlights in Super Late Model racing and his NASCAR career. The SpeedFest 200 Presented by Racecar Engineering for the ARCA/CRA Super Series will be his fifth start with the series and his second start in the SpeedFest event.

More event and track information can be found at www.showtimespeedway.us.

Additional information on all the CRA Series, including entry forms and the schedule of events for CRA SpeedFest 2021, can be found at www.cra-racing.com. 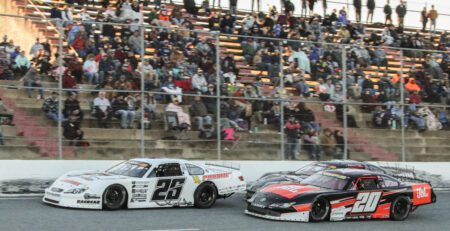