Speed51.TV to Broadcast Event Live to Their Subscribers

XENIA, Ohio (May 20/ 2021) – Just a year after his induction into the NASCAR Hall of Fame, legendary NASCAR driver Bobby Labonte will be chasing the checkered flag in the Dayton 100, a new event for the JEGS/CRA All-Stars Tour presented by Chevrolet Performance.

The June 27 race at Kil-Kare Speedway will be a new challenge for Labonte, who will be driving the No. 26 Platinum Express PRO late model for the first time on the very tricky third-mile oval, where he’s never before competed.

Labonte’s Kil-Kare appearance comes 20 years after being there with his son, Tyler, who was competing at the adjacent quarter midget race track.

“I remember walking over and looking at the big track and thinking, ‘Wow, that’s an odd shape,’ ” Labonte reminisced. The tight asphalt oval was once described as an “11-turn racetrack” by fellow NASCAR Hall of Famer Darrell Waltrip, presenting a challenge for Labonte and the rest of the JEGS Tour drivers.

The Platinum Express team fielding Labonte’s Hamke late model is one of the country’s premier operations. With dozens of wins and championships, team owner Myna Burba goes to the track to win. 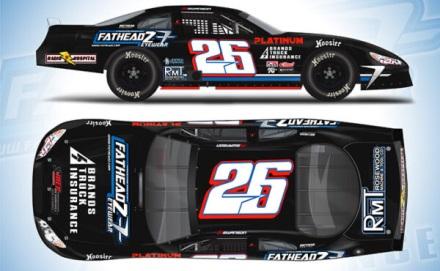 Labonte’s Platinum Motorsports entry will look similar to that of Kody Swanson’s.

“I’m really looking forward to having someone of Bobby’s caliber in one of our race cars,” Burba said. “This will be very special for our team.”

The team has a full schedule of late model competition in 2021 with five-time USAC Silver Crown champion Kody Swanson also entered for the Dayton 100. The addition of a car for Labonte will be extra work but an opportunity that was just too good to bypass, according to crew chief Marc Metz.

“Although we have an excellent ‘Pro car,’ Kody will be driving it. We also have a great ‘super late model’ car, which we’re going to have to switch over. There’s a good bit of work involved going from a Chevy to a crate Ford, but with help from Jeff Wooten of Wooten Automotive we jumped at the chance,” Metz said.

Metz has always been a huge Bobby Labonte fan and recalls an encounter with longtime Labonte team owner Joe Gibbs while crewing for Jeff Foltz in 1996.

“We were running an All Pro Late Model race at Volusia County Speedway. JD and Coy Gibbs were racing, and I was sporting my favorite bright green Labonte/Interstate Battery T-shirt,” Metz explained. “I was bent over working on the car, and someone tapped me on the shoulder and said, ‘Nice shirt’. It was Joe Gibbs, and I’ll never forget it!” “What a great guy!”

Bobby Labonte is not only a successful NASCAR driver and NASCAR Hall of Fame Class of 2020 inductee, he also is a successful television race analyst, businessman and philanthropist. Labonte is in his sixth year as a race analyst and his third season on FS1’s NASCAR RACE HUB show. He owns Breaking Limits, a full-service marketing, public relations, sponsorship and events agency; is co-owner of Longhorn Chassis, a successful dirt late model and modified chassis and fabrication business; and he leads the Bobby Labonte Foundation, which works in partnership with the local community to empower parents, families and children to build a strong foundation for childrens’ futures.

On Sunday, June 27, Kil-Kare Speedway will be the site of a 100-lap JEGS/CRA All-Stars Tour Pro Late Model event called the “Dayton 100.”

Speed51.TV will be showing the event live to their subscribers, with Speed51.com providing promotional assistance in front of the event.

The historical Dayton 100 has its roots at the old Dayton Speedway in 1950. The history of the event beginning with “big cars” is astounding! Many of the cars literally were Indy 500 race cars early on. Likewise, Indy 500 drivers dominated the 100-lap races at the high-banked, half-mile oval. Eddie Sachs (twice),”Iron” Mike Nazaruk, Troy Ruttman and Pat O’Connor were victorious in the 1950s.

When stock cars became the headliner in the 1960s, Nelson Stacy, Paul Goldsmith, Benny Parsons and Jack Bowsher graced victory lane. Thanks to the great news print coverage of Dayton motorsports, there are reams of pictures and clippings.

When the Dayton 100 was relocated to the seven-turn Kil Kare oval in 1982, local legends added their name to the incredible list. Robbie Dean, Dick Dunlevy Jr. and John Vallo dominated the 1980s and ’90s.

Eventually, special events became the norm at Kil-Kare, but the big event remained. Drew Charlson, Oakley and Justin Alsip came out on top.

This year will be the first JEGS/CRA All Star-sanctioned event. A host of CRA regulars will be joined by several Ohio late model regulars.

In addition to the JEGS/CRA All Star, there will be a host of support divisions including the all new “Wheelman Street Stocks,” a compact division and concluding a full day of motorsports competition, a 50-lap compact enduro.

Pit gates open at 10:00am with general admission turnstiles swinging into action at Noon. Qualifications are set for 1:30 and the first green flag flies at 3pm.

For information about the JEGS/CRA All-Stars Tour Presented by Chevrolet Performance check out www.cra-racing.com.

Champion Racing Association always prides itself at being at the leading edge of racing and technology.  And now CRA has... read more