Hocevar Puts Money in the Bank at Home Track

Hocevar Puts Money in the Bank at Home Track

Special from Speed51.com – Carson Hocevar continued where he left off from last year’s Money in the Bank 150 Wednesday night, leading the final 127 laps and banking the $10,000 for the second-straight year. It was the second consecutive year he dominated the race, this time doing so with TK Motorsports in the No. 71.

He started on the pole after the invert and fell back to third early in the 150-lap event, getting passed by Eric White and Tyler Roahrig. His time spent there was short-lived, finding his way back to the lead and never looking back.

“The car was really good. We weren’t sure what we were going to have going into tonight, changing cars and everything. It’s definitely not easy here, I still haven’t found that perfect race car yet. Luckily we found an adjustment late that put a lot of security into the race car and that was a difference-maker.” – Carson Hocevar

After winning six races last year including the Winchester 400, the Money in the Bank 150 was the NASCAR Truck Series rookie’s first win of 2021. He is now three for three when it comes to driving for TK Racing, having won the Winchester 400 and the Redbud 400 with the team.

“Anytime you can win a race, especially of this caliber, it’s big. There were really only two or three guys who really hit it, the No.6 car (White) was really good. I think we had track position and we were just a bit better on drive off. We managed the gap and he kept me honest all night.”

Derek Griffth’s first trip to Berlin ended with a runner-up effort with a late move on the final restart with just three laps to go. The New Hampshire driver showed why he was the number one overall pick in this year’s Short Track Draft at one of the toughest racetracks in America, showing speed all day before a podium result.

“We started off in the front few rows there and really had to work on it to get it where it needed to be. We had that caution and this thing was a complete rocket ship after that, just had to manage this thing and save tires,” Griffith said.

“I was hoping for those two yellows at the end because I knew we had to enough to race with him, but just not enough to race to him. It played to my favor tonight.”

Eric White had his coming out party Wednesday night, leading laps and running in the top-two up until the final restart. Even while disappointed with a third after running second most of the race, the Berlin regular was still proud of his team’s efforts.

“The car was real good all night. I started the race outside pole, Carson started on the pole so I figured me and him would check out and kind of pace ourselves, not try to burn it up. That’s pretty much how the whole race went, he waved me by and I led a couple laps, I waved him by and he led the rest of the race. I probably shouldn’t have done that but it was a good night overall.”

A pair of Berlin regulars rounded out the top-five, with former champion Nate Walton and long-time Modified ace Blake Rowe taking the spots.

Money in the Bank 150 Unofficial Results: 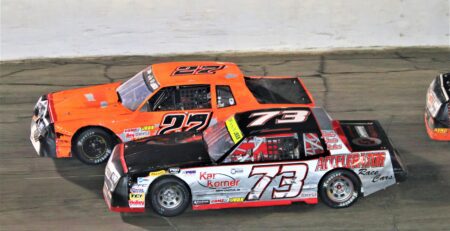 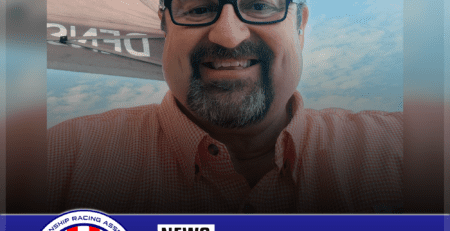