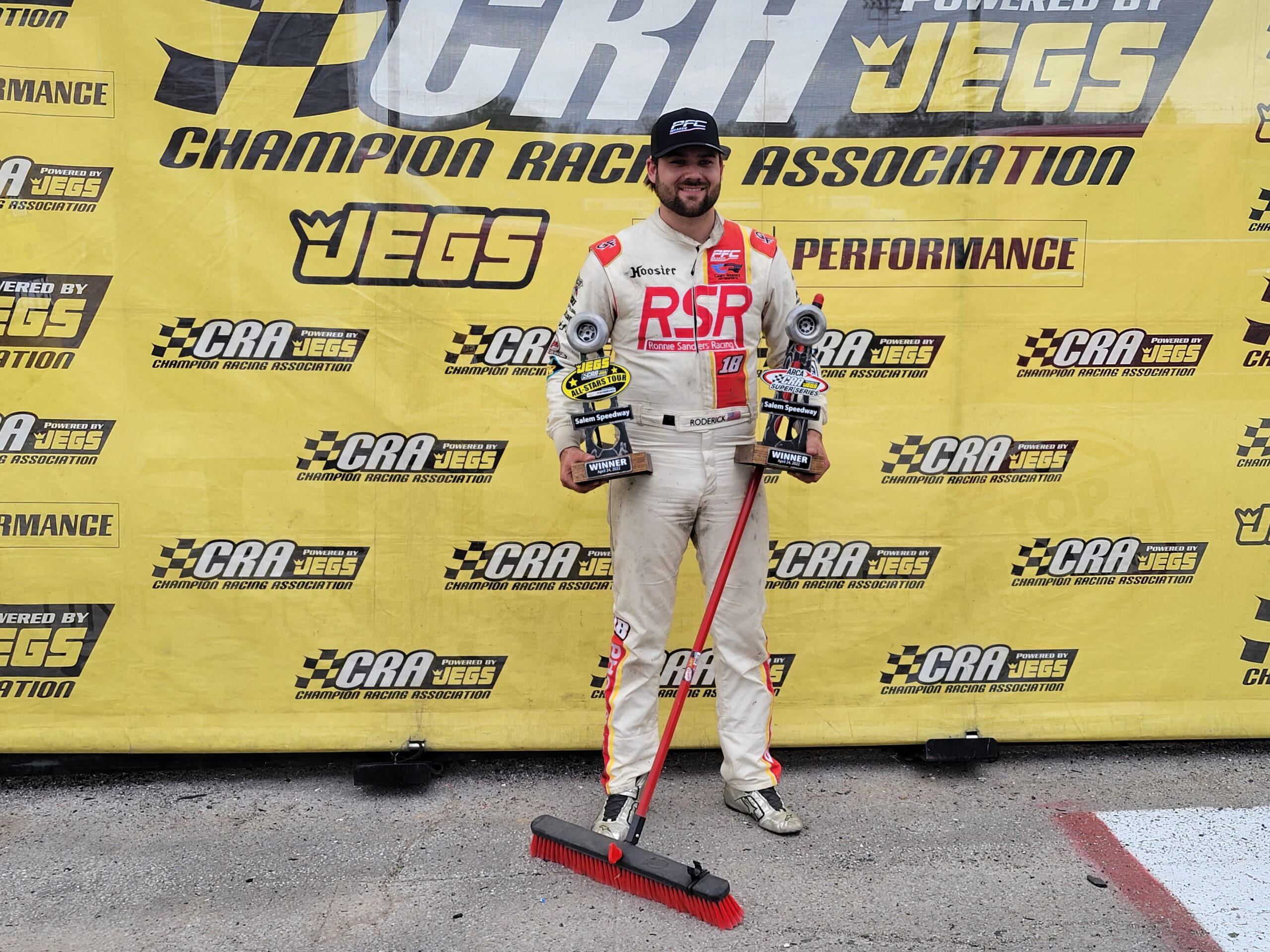 Special from Racing America – It was the Casey Roderick show Sunday afternoon at Salem Speedway, picking up his first (two) wins since his All American 400 triumph in 2020.

The former Southern Super Series champion swept the ARCA/CRA Super Series and JEGS/CRA All-Stars Tour races in his first appearance at the high-banked half-mile. While he joined Travis Braden (2016 Winchester 400 weekend) and Stephen Nasse (2019 World Stock Car Festival, also at Winchester Speedway) as the third driver to sweep CRA Super and Pro Late Model races during a single event, Roderick became the first driver to do so on the same day.

He handed Rock Motorsports their first win as a team to kick off the afternoon in exciting fashion. After methodically working his way through the field, he hunted down and passed Dakota Stroup with 18 laps to go to win his third-career JEGS/CRA All-Stars Tour race.

Meanwhile, the Super Late Model race was a different story. Making his debut for Team Platinum, he drove from fifth to the lead in just twelve laps and proceeded to check out from the field, winning his fourth ARCA/CRA Super Series race by half a lap.

“I’ll tell you what, this thing was hooked up. I didn’t want to run too hard there and burn our stuff up so I went and took control of the race and control the pace, that’s why I went hard those first few laps to get around those guys,” Roderick said after the ARCA/CRA Super Series race. “I felt it for a couple laps and it felt so good and I said I have to take control of this race.”

While he continued his recent partnership with Rock Motorsports on the Pro Late Model side, Sunday’s Super Late Model race was his first start with Team Platinum after the former Snowball Derby winning team spent 2021 with Kody Swanson and Jack Smith.

He thanked his two car owners, Tyler Porter and Myna Burba, for working together to make the weekend sweep happen.

“I want to thank Team Platinum for letting me drive their car. All the guys did a heck of a job yesterday and today. It started out a little rough but we kept working on it and it got really good. I want to thank Tyler (Porter) for bringing me in for the Pro race and helping us all work it out to where I can drive this car too.”

“I really enjoyed this weekend and hopefully we can put a couple more races together.”

Salem, IN (May 10, 2018) – Champion Racing Association Powered by JEGS Officials have announced the CRA Cash Bonuses and... read more