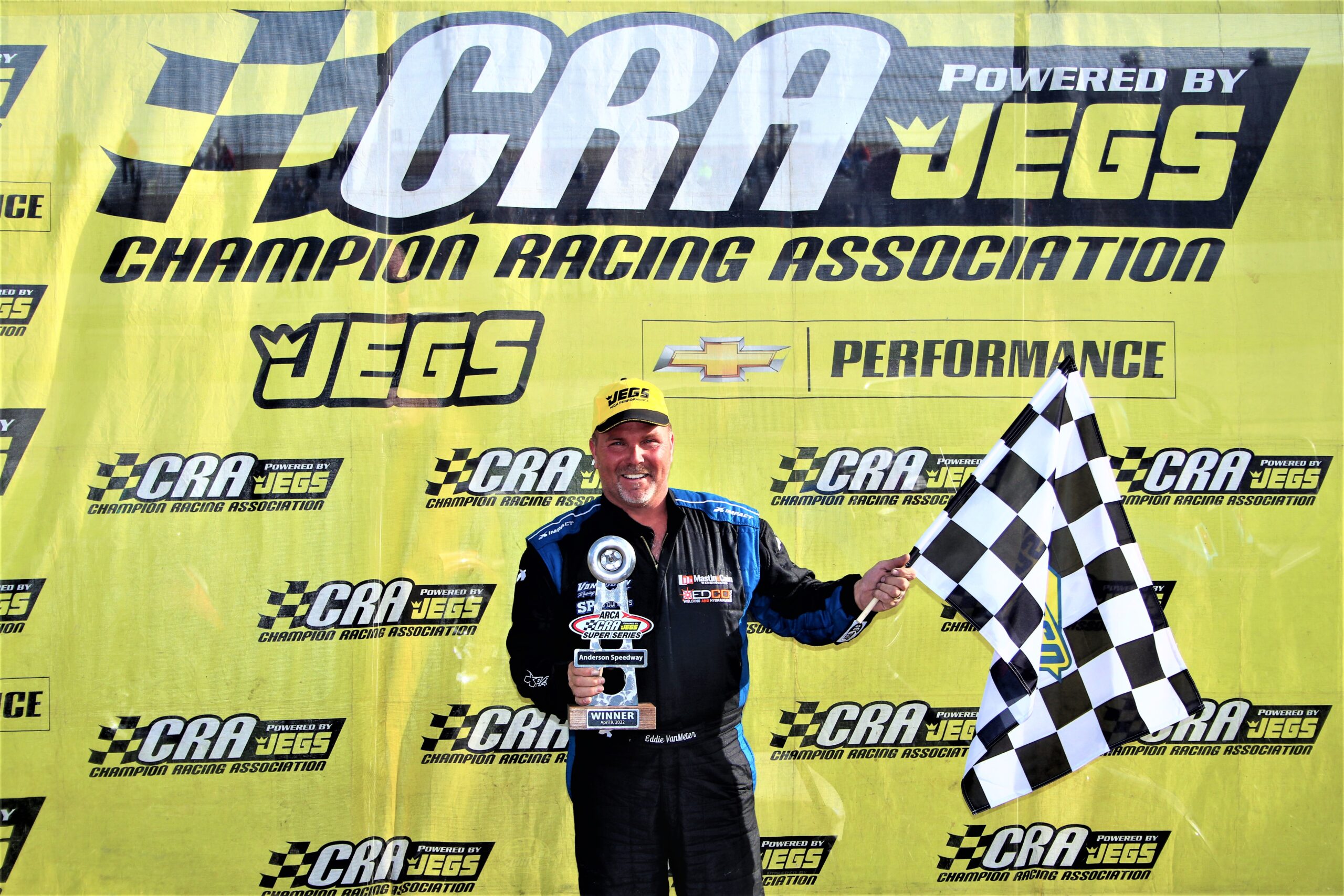 Salem, IN (April 11, 2022) – Veteran Indianapolis racer Eddie Van Meter got back in victory lane with the ARCA/CRA Super Series Powered by JEGS series Sunday afternoon in the Mitch Smith Auto Service 125 Presented by Perfecto Tool at Anderson Speedway. The win was Van Meter’s third all time with the series and his first since the 2015 season, that win also came at Anderson Speedway, it took a little luck but it’s a win he earned!

“It feels really good to get back in victory lane with this series and at Anderson Speedway,” remarked Van Meter in victory lane. “Cody drove me really tough before we were even battling for the win, we were just racing hard for third place when we got a little luck with the leaders getting together and giving us a chance to race for the win. Cody drove me hard, he wanted to win as bad as I did, but I appreciate him not wrecking me! I want to thank my crew for all their hard work, my family for all their support and VanDoorn Racing Development for giving me a fast car. I’ll take a little luck anytime I get it!”

Scotty Tomasik grabbed the early lead from his pole starting position after Francis Engineering Fast Qualifier Hunter Jack, the series defending Champion, drew a six for the events inverted start. Tomasik led the first 17 laps before Dalton Armstrong got by to take the lead on lap 18.

Armstrong would lead through several restarts and pulled a way to a sizable lead several times in the middle of the event before Jack got to Armstrong’s back bumper and started pressuring Armstrong for the lead as the laps wined down.

Armstrong’s car started getting loose giving Jack the opportunity to try and get the lead and his first series win. Jack really started pressuring Armstrong hard when the two made contact in turn one on lap 112, the contact resulted in Armstrong spinning and bring out the event’s fourth and final caution. Armstrong was able to continue, but both cars involved were put on the tail of the field for bringing out the caution, giving the lead to Van Meter.

Coughlin, the series 2016 Champion, finished in second and earned the FLUIDYNE Cool under Pressure Award.

“I tried to be as aggressive as I could and not turn him”, remarked Coughlin. “It was a good day for our team and a good way to start our 2022 season!”

Albert Francis would battle back from the tail of the field to get a third-place finish, his highest ever with the series. J.P. Crabtree would come from his 10th place starting position to finish in fourth, earning a Hoosier Racing Tire Performance Award and the Progressive Racing Engines Hardcharger Award. Tomasik would finish in fifth place after pitting late to make adjustments. Jack would battle back to finish in sixth, earning and earned the Sweet Manufacturing Sweet Move of the Race Award for his high side passes early in the event to gain several positions.

Late Model Seminar in conjunction with the P.R.I. Trade Show

Salem, IN (September 26, 2018) – The Lawrence Towing CRA Street Stocks Powered by JEGS will be back in action... read more