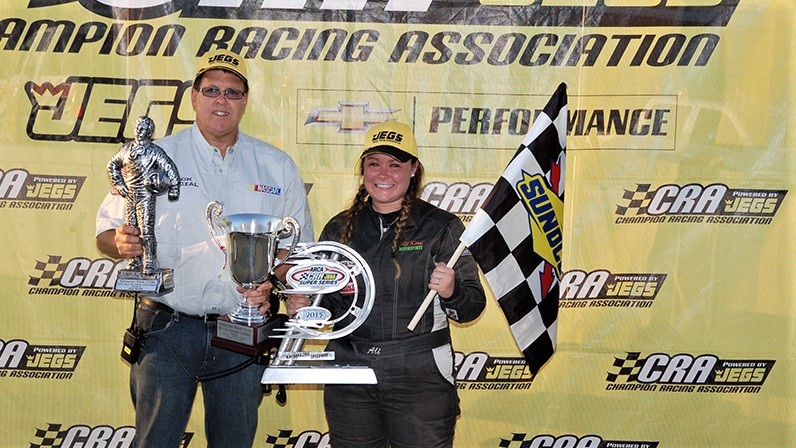 Salem, IN. (May 24, 2022) – Fremont, Ohio’s Ali Kern Dukeshire will make her return to race with the ARCA/CRA Super Series Powered by JEGS at the upcoming $10,000 to win CRA Laural Highlands 150 at Jennerstown Speedway Complex on Saturday June 4th. The event is attracting some of the best late model competitors in the country and will bring the former full-time series competitor Kern Dukeshire back behind the wheel for the first time with CRA since the 2016 season.

Kern Dukeshire, who raced in 35 series events as Ali Kern, mostly during the 2013, 2014 and 2015 seasons, while making one start during the 2016 season, before climbing out of the race car, first to marry her Car Chief and best friend Jake Dukeshire, then having a son Benton. The Dukeshire’s then started a business together, Rush Repairs and Recovery, with her parents Mike and Kathi Kern.

“It’s kind of a comeback tour,” remarked Kern Dukeshire. “We took six years off to do some adulting, now I’m ready to climb back in a racecar and go compete again. We are back with Scott Neal as our Crew Chief and lucky charm. The ARCA/CRA Super Series is really special to me.  We’ve had a lot of success in that series, and we’re thrilled to be back. We will also be running some of the JEGS/CRA All-Stars Tour races this year.”

Kern Dukeshire is one of only two females to win an ARCA/CRA Super Series event since the series began in 1997. Kern Dukeshire got that win at Kalamazoo Speedway on August 12th, 2015, holding off a hard charging Quinnton Bear to get that win in front of a sold-out grandstand when the series raced with the track’s Kalamazoo Klash event. On that Wednesday night Kern Dukeshire joined Kenzie Ruston, who is now Kenzie Hemric, the wife of 2012 JEGS/CRA All-Stars Tour Champion and now NASCAR competitor Daniel Hemric, as a female winner with the ARCA/CRA Super Series. Kenzie Hemric won at Lucas Oil Raceway on October 2nd, 2011.

More event information on the CRA Laural Highlands 150 and track information is available at www.jennerstown.org.

Competitors are reminded that this Saturday is the last day teams can enter in advance for the CRA Laural Highlands 150. The event entry form and rules for the ARCA/CRA Super Series are available on the CRA website at www.cra-racing.com.