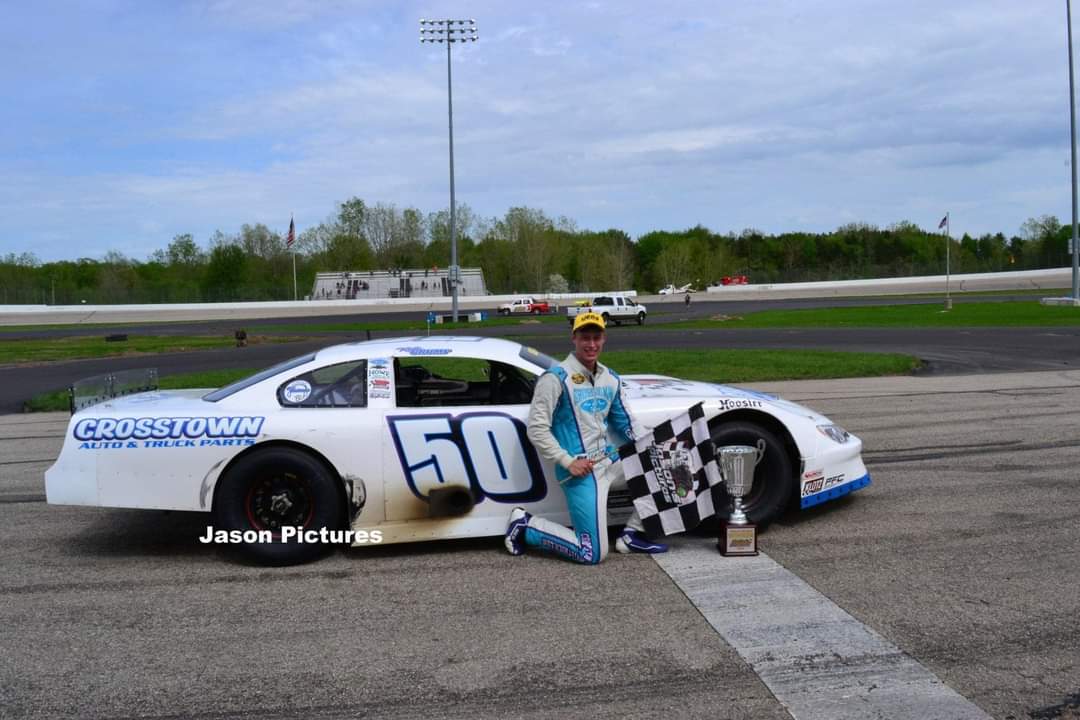 Salem, IN (May 16, 2022) – Brighton, Michigan native Kyle Crump continued to show he is one of the up and coming Late Model racers in the country with his win in Sunday’s JEGS/CRA All-Stars Tour Presented by Chevrolet Performance Triple Crown event at Birch Run Speedway. The event was originally scheduled to take place Saturday night, but persistent rain moved the event to Sunday afternoon. The delay did not keep Crump from getting his third all-time series win and the second for his Crosstown Motorsports Team.

“I thought we were good to go and would cruise to the win until that caution came out with seven to go,” remarked Crump in victory lane. “I knew that would put Shotko right there with me and with so much on the line to win this event with the Triple Crown bonuses, I knew he was going to really race me hard. We made a little contact, but I was able to hold on and get the win. I want to thank all the guys at Crosstown Motorsports for letting me driver this car and for all their hard work this weekend. This one is a little more special because it’s close to home, we are looking forward to going for the bonus at the next to JEGS Tour Birch Run event!”

Albert Francis took full advantage of his pole starting position at the drop of the green flag after Nova Motorsports Fast Qualifier Evan Shotko drew an eight for the events inverted start. Francis would battle Dakota Stroup for several laps before getting a comfortable lead while Shotko worked his way to the front with Crump conserving his tires for the late run.

Shotko moved in to third place on lap 30, then would start his torrid battle with Stroup for second place. Crump made his way to fourth place as Stroup and Shotko continued to wage a war for second place. After halfway Crump would work the high side past Shotko, then Crump went again go to the high side to get past Stroup for second. Crump then set his sights on Francis while Shotko and Stroup continued to battle for the third position.

Crump worked his way past Francis on lap 66 to grab the lead. Shortly after that Shotko and Stroup would make contact with Stroup making a great save but losing third place to Shotko. Shotko and Francis would also make contact battling for second with Francis making the save of the day but losing second place to Shotko. While those guys battled for second, Crump had pulled out to a sizable lead and looked to be on his way to a win when the caution flew on lap 93 with seven laps to go setting up a late restart.

Crump chose the outside for the lap 93 restart and pulled away on the start to get the lead for a lap before the fifth and final caution flew.

Crump would again keep the lead on the lap 94 restart, but the battle was not over. Shotko closed on Crump’s tail coming to the white flag, the two would make contact in turn one with Shotko going low to try to make the pass. Crump would hold on and go on to get the win. Crump would receive the AR Bodies Cool Move of the Race Award for using the outside grove to work his way to the front.