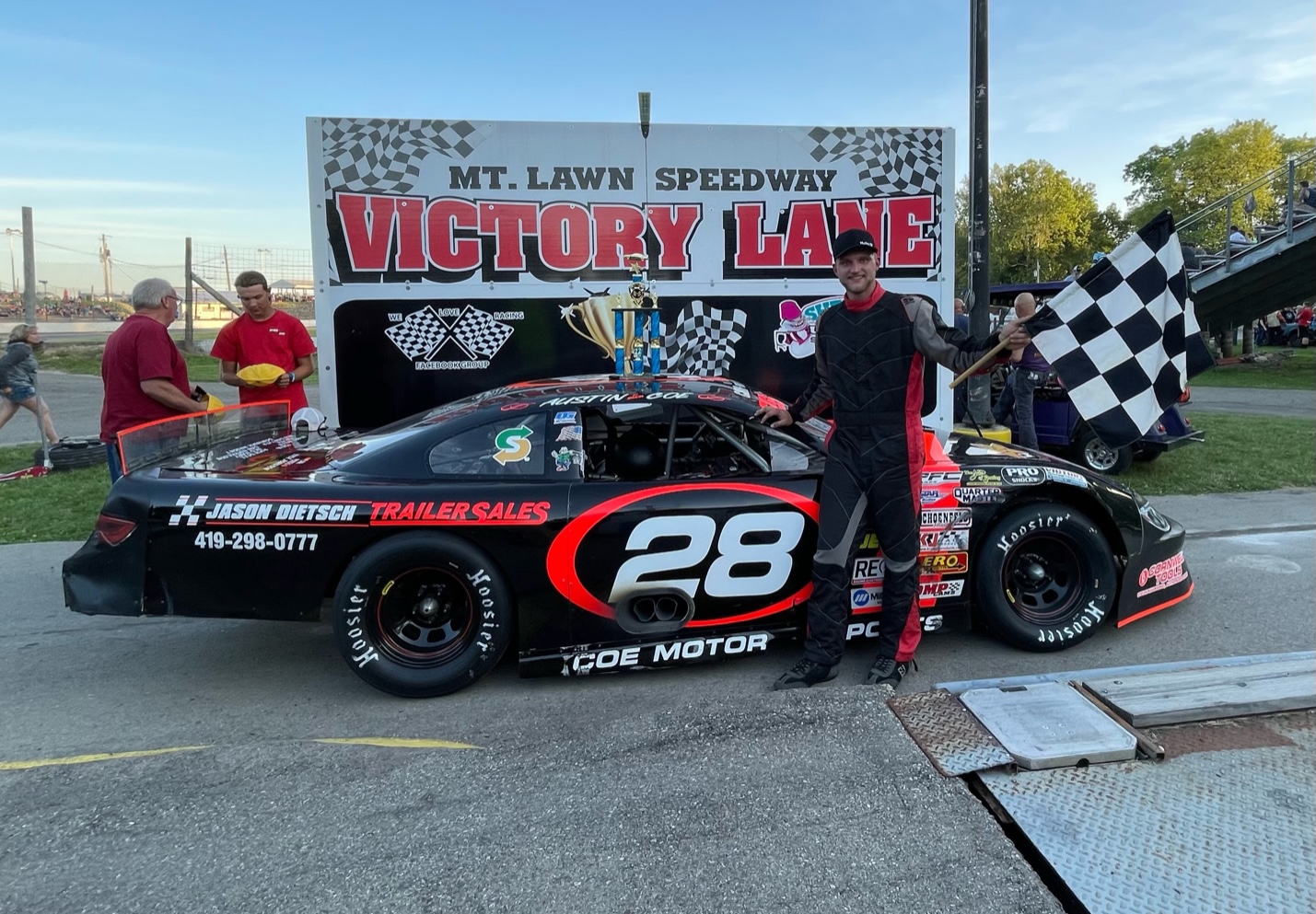 Salem, IN (June 20, 2022) – Fort Wayne, Indiana’s Austin Coe swept the Vore’s Welding CRA Late Model Sportsman Powered by JEGS event at Mt. Lawn Speedway Sunday evening. He was fastest in the practice session, then claimed the Allstar Performance Fast Time, then worked his way from his sixth place starting position to grab the lead on lap 11 and went on to get the win over Ryan Fleming and Cassten Everidge.

“This car was fast from the time we unloaded it,” remarked Coe in victory lane. “We tested yesterday, and it was really good, and it was the same all day today. Have to thank my crew chief Lyle Johnson, he really knows how to make a car get around Mt. Lawn Speedway. Thanks to my parents and family for their support, this is a little Father’s Day present for my dad. Thanks to all our fans that come out to support us and everyone who helps on this car!”

Veteran Central Indiana racer Kent Carson grabbed the early lead from his pole position after the first event start was stopped by an early caution. Carson would lead the first six laps. Series rookie Keegan Sobilo started on Carson’s outside on a restart on lap six and managed to work his way around Carson to grab the lead on lap seven, leading his first ever series laps while Coe was working his way to the front from his sixth place starting position.

Coe worked his way into second and started to hunt down Sobilo when the events third caution flew on lap 10.

Coe would power his way around the outside of Soblio to grab the lead on the restart on lap 11. The event would be slowed by two additional cautions, but Coe was able to fight off the challenges of Fleming each time to continue to lead. Coe would cross the finish line almost two second ahead of Fleming to grab the win, his second straight series win at Mt. Lawn Speedway.

Ohio native Fleming would finish in second. Series regular Everidge would finish in third place. Tyler Marsh worked his way back through the field after being involved in a caution on lap 20 to finish in fourth place and claim the $500 top Mt. Lawn Speedway JW Photography Late Models finisher. Another local driver Jared Henderson would finish in fifth place in his series debut.

Carson would finish in sixth place. Series points leader Kyle Worley would battle back from damage earlier in a practice crash to finish in seventh. Sobilo would hold on to finish in eighth with some right-side damage after contact with the front-stretch wall. Logan Huckeba would finish in ninth with local driver David Clark in tenth.

The next Vore’s Welding CRA Late Model Sportsman event will be Saturday, July 2nd at Anderson Speedway. Information on all the CRA Series is available at www.cra-racing.com.