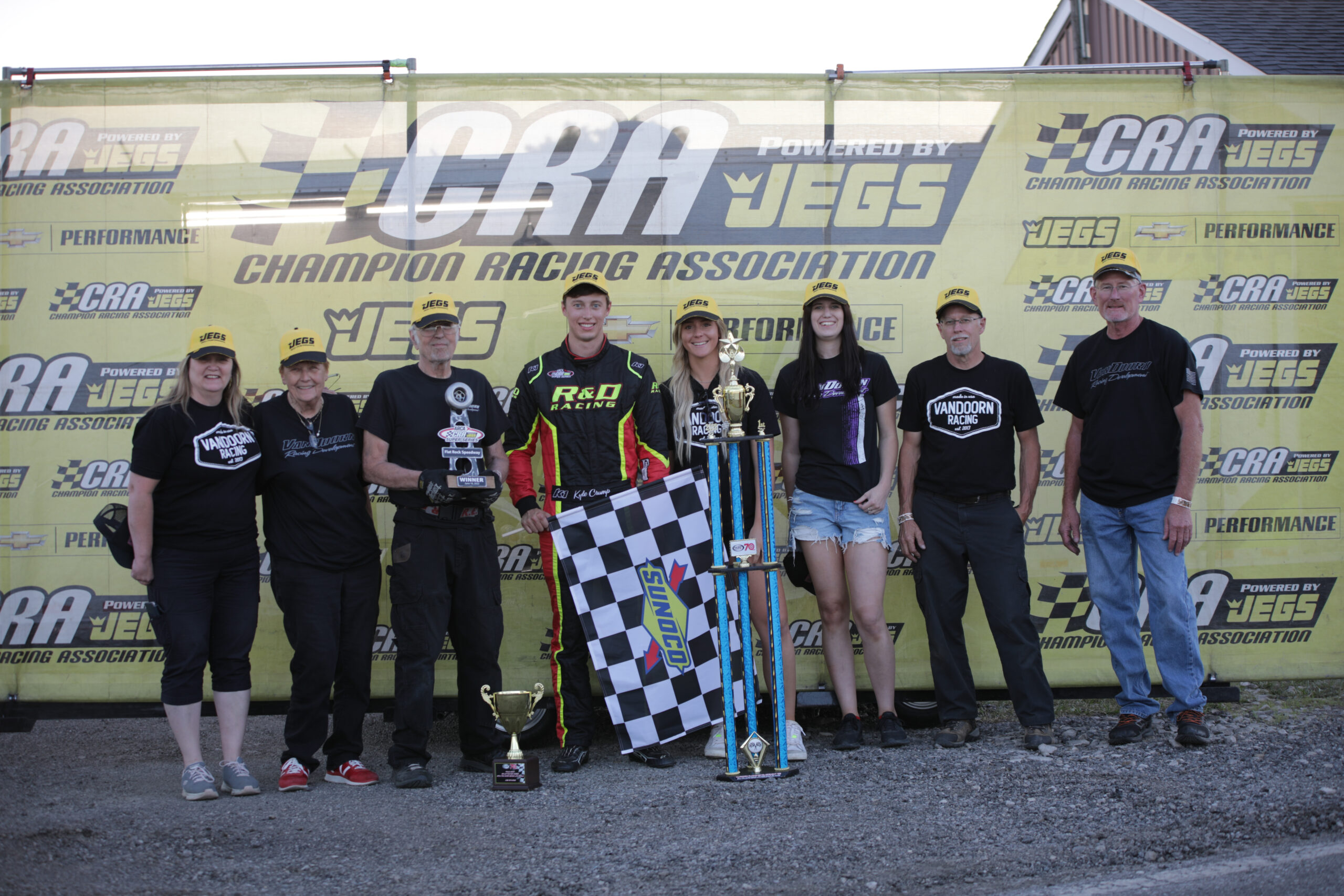 Salem, Indiana (June 20, 2022): Brighton, Michigan’s Kyle Crump continued his winning ways on Saturday night by getting the win in the VanDoorn Racing Development 125 Presented by Fraza at Flat Rock Speedway, which was a combo event for the ARCA/CRA Super Series Powered by JEGS and the JEGS/CRA All-Stars Tour Presented by Chevrolet Performance. Crump picked up another win for car owners Stan and Judi Rosen after winning a JEGS/CRA All-Stars Tour event on May 14th at Birch Run Speedway and winning the ARCA/CRA Super Series event at Jennerstown Speedway on June 4th for Crosstown Motor Sports. Crump also picked up a feature win at Berlin Raceway for the Rosen’s earlier this season.

“It’s great to get the Rosen’s back in victory lane with CRA this season,” remarked Crump. “It’s just been an unbelievable beginning of the season for me, the car was good all day, and it got even better during the race. I’m a very lucky guy to have two great car owners who give me these opportunities. It’s great to win in our VanDoorn Chassis in their event today. Thanks to the whole team and my family for their hard work and for always supporting me!”

Brandon Varney took the early lead from his pole starting position after Francis Engineering/Nova Motorsports Fast Qualifier Kevin Cremonesi pulled a nine for the event’s inverted start. Ethan Stadniczuk, a former regular competitor at Flat Rock Speedway, moved into second and started battling Brandon Varney for the lead. Stadniczuk made the pass for the lead on lap 11 while Crump was working his way to the front from his sixth place starting position.

Stadniczuk lead until lap 32 when Crump would power by to take the lead. The event slowed for the only hard crash in the event when Jeff Vrsek made hard contact with the backstretch retaining wall and collected Hunter Jack. Both cars were done for the day.

Crump was able to hold on to the lead on the restart, pulling out to a final winning margin of almost two and a half seconds when he took the checkers. The win was Crump’s fifth all time ARCA/CRA Super Series win, his fourth with Stan and Judi Rosen. Crump also won last years Redbud 400 and the Battle at Berlin and will be one of the favorites in the upcoming July 16th Redbud 400 at Anderson Speedway. Crump picked up a Hoosier Racing Tire Performance Award for coming from Sixth to get the win. 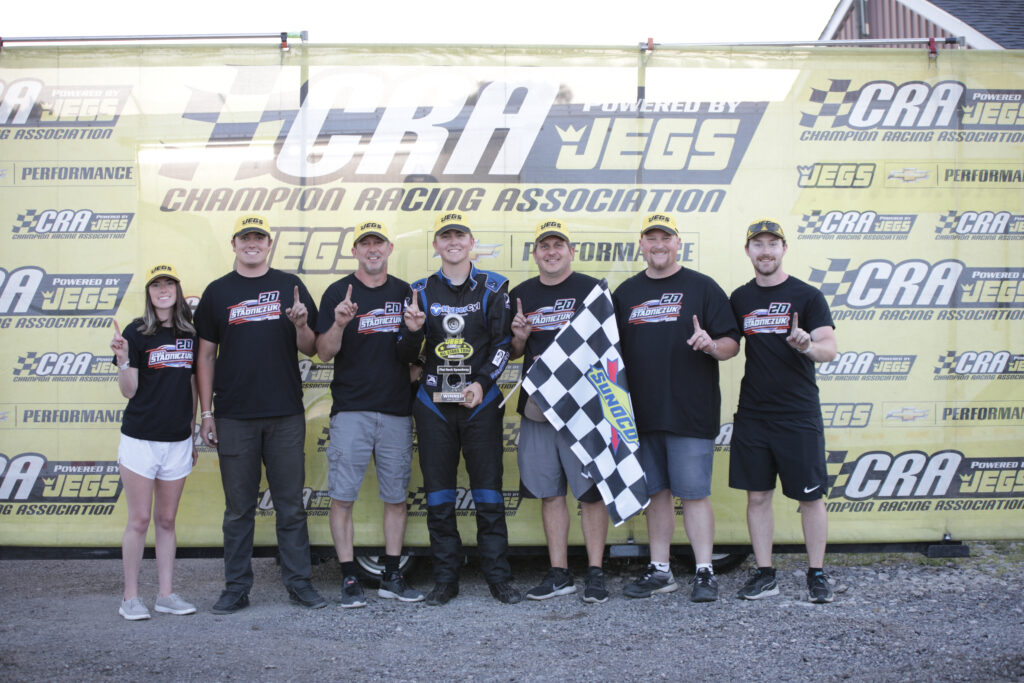 Stadniczuk would finish in second and was the highest finishing JEGS/CRA All-Stars Tour car earning his first ever win with that series and CRA.

“I really wanted to get the overall win, but it’s great to get our first JEGS/CRA All-Stars Tour win today,” remarked Stadniczuk. “I have to thank my dad, my family and everyone one who works on this car and supports our team. We are one of the little guys out here, but we showed today we can race with these guys!”

Stadniczuk picked up a $1,000 cash bonus as the highest finishing JEGS/CRA All-Stars Tour car and earned the FLUIDYNE Cool Under Pressure Award after a spirited battle to stay in second place on several occasions during the event.

Another Flat Rock regular Justin Schroeder would finish in third place after a tough battle for positions through out the event. Schroeder earned the Sweet Manufacturing Sweet Move of the Race Award for his best all time series finish.

Cremonesi would battle back after loosing several positions after some hard contact with another car to finish in fourth place, his best ever CRA finish. Cremonesi’s crew earned the PitBoxes.com Pit Crew of the Race Award after having to change out a dead battery just prior to qualifying starting, giving Cremonesi the opportunity to pick up fast time.

Evan Shotko would finish in fifth place in his back up car after loosing their primary car to a hard wreck in the Money in the Bank event at Berlin Raceway on June 9th. JEGS/CRA All-Stars Tour points leader Nick Egan would finish in sixth place. ARCA/CRA Super Series points leader Eddie Van Meter would race from his 19th place starting position to finish in seventh, earning the Progressive Race Engines Hardcharger Award and a Hoosier Racing Tire Performance Award.

Florida native Steve Dorer would finish in eighth in his first CRA start of the 2022 season after some hard-fought battles for position throughout the event from his 17th place starting position. Leading ARCA/CRA Super Series rookie Billy Van Meter made several great passes towards the end of the event to get a ninth-place finish earning the AR Bodies Cool Move of the Race Award. JEGS/CRA All-Stars Tour regular Dakota Stroup would finish in 10th place in his first ever visit to Flat Rock.