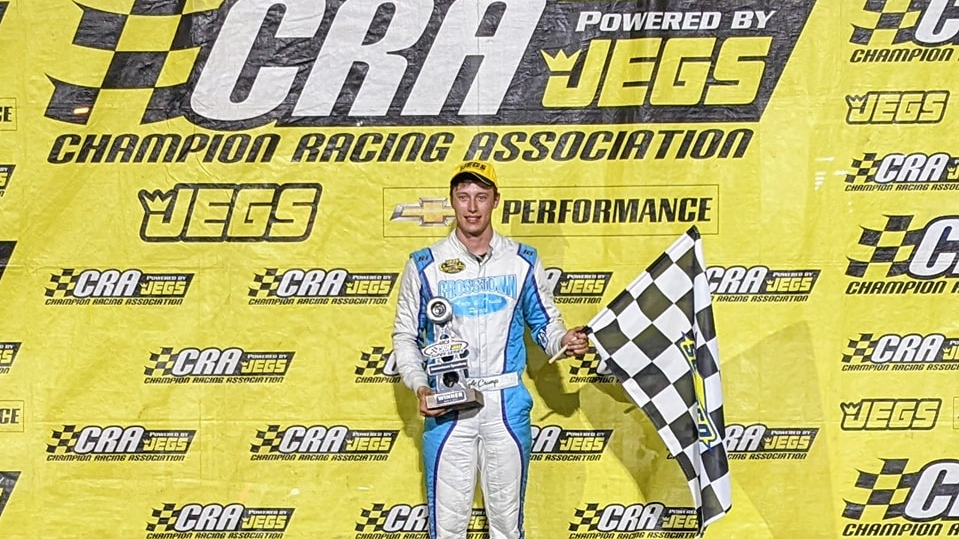 Salem, IN. (June 6, 2022) – Brighton, Michigan driver Kyle Crump added another big win to his resume Saturday night in winning the ARCA/CRA Super Series Powered by JEGS Laurel Highlands 150 at Jennerstown Speedway, on a beautiful evening for racing and fans got their money’s worth with seven feature events and two heat races.

Crump came on the Super Late Model winning scene last season with signature victories first in the Redbud 400 and the Battle at Berlin 150 for car owners Stan and Judy Rosen. Crump then went to victory lane with the JEGS/CRA All-Stars Tour in last year’s Fall Brawl event at Indianapolis Raceway Park for car owners Crosstown Motorsports. Crump picked up another JEGS/CRA All-Stars Tour victory for Crosstown this past May 15th at Birch Run Speedway. Saturday night’s Laurel Highlands 150 was his first ARCA/CRA Super Series start for Crosstown, and Crump did not disappoint having the fastest car over the last 47 laps to get almost a three second win over second place Stephen Nasse and third place Casey Roderick.

“This is awesome to get the win here at Jennerstown,” remarked Crump in victory lane. “I was kind of saving our tires for the last 50 laps and things just worked out in our favor for us to get to the front and pull away for the win. I thought I had a flat tire on the lap 103 restart when I checked up a little and we all went three wide in the front, I wasn’t sure if that was going to work out, but it did. The car really came to life, and I was able to pass the 26 car (Roderick) to grab the lead and pull away there at the end. I was a little worried the engine was going to lay down, but it made it to lap 150 and we got the win!”

Crump added, “ I’m very lucky to have great car owners in Stan and Judy and the Crosstown Team, with them working together to allow me to race in all these great events! It’s cool to pick up Crosstown’s first Super Late Model win in their first series start. What a beautiful racetrack and a great event, we really enjoyed coming over here to race and look forward to coming back!”

Tennessee native Michael House grabbed the early lead at the drop of the green flag after claiming the Francis Engineering Fast Qualifier Award worth $500. The 150-lap green flag event featured Competition Cautions after 50 green flag laps, which resulted in the event’s first caution at lap 50, with most of the field staying on the track. Casey Roderick was the biggest early mover coming from his 12th place starting position to battling with the top five, but there was great side by side racing for several positions through the field.

House continued to lead at the lap 51 restart as the field spread out with most teams trying to save their left side tires and waiting to change their two spare right side race tires at the next caution, which didn’t come out until another Competition Caution  at lap 100.

At that lap 100 yellow, the entire field pitted under the Controlled Caution, which gives the teams two laps to change their two tires, add fuel and make any adjustments. House’s team had issues getting fuel in their car which resulted in the team not getting out in the allowed laps with the Controlled Caution resulting in them losing their position on the track and the lead of the race for the lap 101 restart. Jake Finch, Albert Francis and Eddie Van Meter, all lead lap cars, were also penalized and lost their positions for not getting their service done in the allotted laps at the lap 100 caution.

Jesse Love grabbed the lead on the lap 101 restart and was surrounded by a strong group of competitors who had been battling in the top five throughout the previous 50 laps including Derrick Griffith, Crump, Nasse and Casey Roderick.

Griffith grabbed second place and immediately got to Love to battle and take the lead on lap 102 with a great side by side battle. Griffith and Love made contact and made passes of each other with Griffith still leading at the line on lap 103, but backstretch contact between the two resulted in both competitors spinning and making contact with the outside wall in turn three. House also spun and backed his car hard into the outside wall. Griffith’s and House’s cars were too heavily damaged to continue while Love’s crew were able to make repairs so he could finish the race.

With first and second out. That handed the lead to Roderick who had gotten to the third position prior to the lap 103 caution.

Roderick kept the lead on the restart and managed to lead through lap 116 when his car got really free, and Crump was able to make the pass and grab the lead on lap 117. The rest of the race would go caution free with Crump pulling out to a good lead and eventually grabbing the win and the $10,000 winner’s share of the purse by almost three seconds over Nasse. Nasse picked up the FLUIDYNE Cool under Pressure Award for his tough top five battles for position throughout the race.

Roderick would hold on to finish in third place earning the Progressive Racing Engines Hardcharger Award and a Hoosier Racing Tire Performance Award. Texas Native Logan Bearden would come from his 11th place starting position to finish in fourth place and picked up the Sweet Manufacturing Sweet Move of the Race Award.

2020 Jennerstown Speedway Late Model Champion Albert Francis had a very interesting Saturday. He missed practice while attending a wedding. Francis flew in on a helicopter after the wedding, landing just outside the track to make qualifying. Francis would battle back from his penalty during the second Controlled Caution to finish in fifth place earning the AR Bodies Cool Move of the Race Award and his pit crew earned the PitBoxes.com Pit Crew of the Race Award for making great adjustments helping him earn his fifth-place finish.