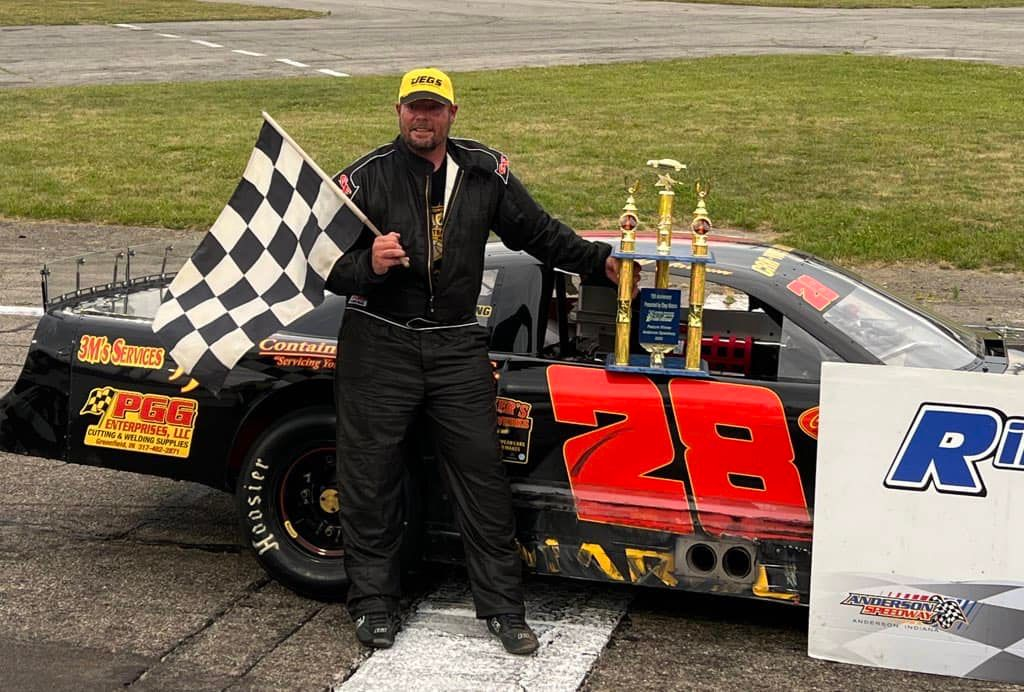 Muncie’s J.P. Crabtree edged out Marcum during Allstar Performance qualifying, then drew a six for the events inverted start.

The early lead was taken by Kentucky driver Jared Soards in his series debut, with Jim Crabtree Jr. running second followed by Marcum and Buddy Davis.

Soards led only the first lap as Crabtree used an outside move on the back straight with Marcum following suit a lap later on the front straight taking over first and second moving Soards to third.

Marcum took the lead following the second caution period on lap eight for debris on the track and used the high groove down the back straight to pass Crabtree.

Crabtree and Cassten Everidge staged a spirit battle for the second spot for the next 25 laps.

J.P. Crabtree dropped back to ninth in the early stages of the race and didn’t crack the top five until lap 18. J.P. Crabtree passed his dad Jim Crabtree Jr. for third on lap 26 and Everidge for second on lap 30.

Marcum’s substantial lead was wiped out on lap 54 when Mike Sargent spun and made contact with the outside retaining wall in turn two.

On the final restart Marcum maintained the lead eventually winning by 5.8-seconds over J.P. Crabtree with Jim Crabtree Jr. and series rookies Keegan Sobilo and Kaden White rounding out the top five.

“The crew always puts together a great car for Anderson,” Marcum said in the Riley & Son Victory Lane. “The car doesn’t have a lot of fall-off. We have a good long run car.”

Marcum said anytime you’re out front the caution flag is the last thing you want.

“J.P. (Crabtree) is one of the last guys you want to see on the outside,” he said. “He’s a heck of a competitor and they always have fast race cars.”

J.P. Crabtree said he got shuffled back at the start and wasn’t that concerned. “All in all, it was a decent night for us, car is in one piece,” he said. “If we had a little bit better tires to start with, we might have been able to get a little closer.”

Jim Crabtree Jr. said his car was off a little bit. “Not bad,” he said. “We have some work to do to get back up to the front.”

The next Vore’s Welding CRA Late Model Sportsman event will take place on Saturday, August 13th at Anderson Speedway. Information on all the CRA Series is available at www.cra-racing.com.