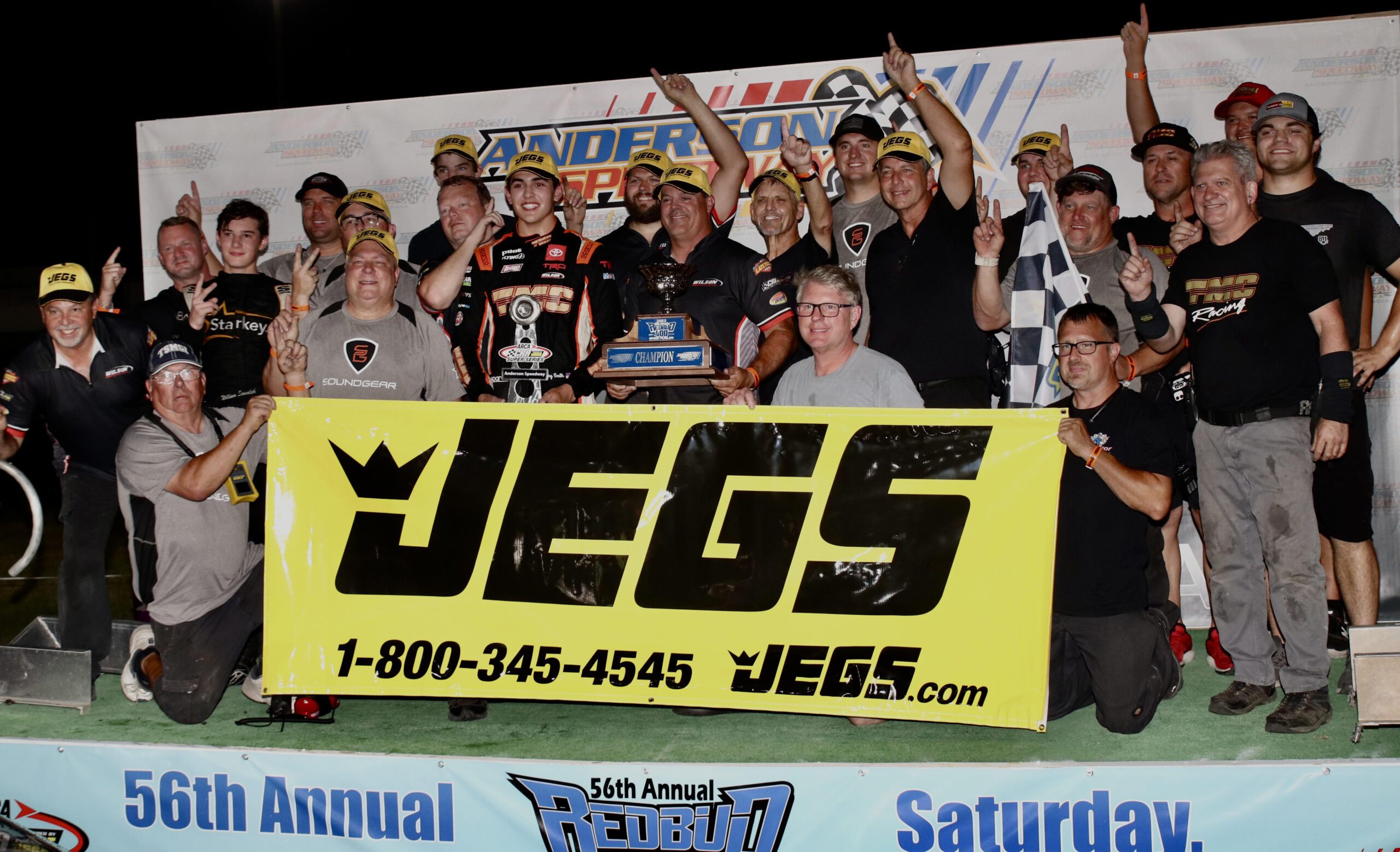 Salem, IN (July 17, 2022) – Sammy Smith, in dominating the 56th Annual Greg Hubler Automotive Group Redbud 400 presented by Mitch Smith Automotive and Perfecto, crossed another race win off his “bucket list”. Smith led 379 of the 400 laps around Anderson Speedway on Saturday in the ARCA/CRA Super Series Powered by JEGS sanctioned event, holding off his Wilson Motorsports teammate 15-year-old William Sawalich by 2.851-seconds. He was the second driver from Iowa to win the Redbud 400 joining inaugural race winner Iggy Katona.

The two Wilson Motorsports teammates led 392 of the 400 circuits around the high banked quarter-mile oval.

Several of the expected contenders didn’t make it to the halfway point of the race with Casey Roderick, Jesse Love, Casey Johnson and Dalton Armstrong all falling by the wayside as a result of mechanical woes or contact.

“Winning the Redbud ranks pretty high,” Smith said. “There are five or six crown jewels that I want to win, and this makes three of them so far. We haven’t raced these cars as much this year, and I had to get my butt kicked a couple of times before we came here, but now we’ve got good momentum to take us to IRP in a couple of weeks!”

Smith added,” the guys at Wilson Motorsports gave me a great car today, I appreciate all their hard work. I also want to thank TMC Transportation and Pilot-Flying J for their support, I really enjoy racing these late models and couldn’t do it without their support!”

Sawalich took the lead from the pole position after setting fast time in Francis Engineering qualifying and was chased by Smith who started on the outside of the front row.

Smith took the point on lap 54 following a restart with an outside pass of Sawalich on the front straight. The two teammates ran one-two for the next 223 circuits when the leaders stopped for the first time after Love slowed on the track in turn two with engine failure.

That gave Cole Butcher the lead, but on lap 232 Smith and Logan Beardon went past Butcher using the high groove on the back straight.

The final caution flag waved on lap 349 for a competition yellow after 75 consecutive green flag laps, but Smith, Sawalich and third place running Stephen Nasse elected not to stop.

From there Smith went onto the victory while Sawalich battled a left front tire going down. Crump came home third followed by Nasse and Beardon, the only cars on the lead lap.

“The flat left front impacted our effort over the final ten laps,” Sawalich said “We struggled in practice, but the crew worked to get the car better.”

Crump said something broke before qualifying, which put the team in a deep hole.

“We had to take left sides early, because we didn’t know what the issue was,” he said. “That put us off cycle and having to battle through the field, used my stuff up.”

Bubba Pollard lost two laps early in the race after changing a flat right front, but by lap 264 was back on the lead lap. Pollard appeared to be riding comfortably and saving his tires when he pitted on lap 294 when the hood popped up over his windshield and he retired for the night, credited with a tenth-place finish.

The ARCA/CRA Super Series Powered by JEGS will resume their 26th Anniversary Season Presented by Team Construction this Saturday in the 56th Annual Greg Hubler Automotive Group Redbud 400 Presented by Mitch Smith Auto Service and Perfecto at Anderson Speedway, located in Anderson, Indiana. Anderson Speedway is where the series raced its first ever event on April 26, 1997, where two time series Champion Brian Ross came away with the victory.

The 56th Annual Greg Hubler Automotive Group Redbud 400 will be 400 laps counting yellows and will pay the winner $15,000. The event will also feature cost savings Controlled Cautions. When a yellow comes out teams will have three laps to service their race car without losing laps or positions on pit road. Those cars will then line up behind the cars that did not pit at that yellow. Teams not getting out of the pits in the three laps will have to fall to the tail of the field and will risk losing laps.

There is plenty of talent in the list of entries to date for the Redbud 400 including two of the top Super late Model drivers in the country, Bubba Pollard and Stephen Nasse. Both are former Southern Super Series Champions and have won Super Late Model races all over the country, but both are seeking their first win in the Redbud 400. Nasse was the 2019 Winchester 400 winner, while Pollard won the 2022 SpeedFest event in January and both competitors have been to victory lane with the Southern Super Series in 2022.

2021 Winchester 400 winner Sammy Smith, who is the current ARCA Menards East Series points leader with three series victories so far in 2022, is entered. 2020 ARCA West champion and a onetime 2021 event winner Jesse Love is entered. William Sawalich, a winner with the Southern Super Series this year is entered in his first Redbud 400.

ARCA Midwest Tour competitor Austin Nason is entered as he looks to get to victory lane at the Redbud 400 after getting passed by Crump on the last lap in last years event. Two-time ARCA Midwest Tour Champion Casey Johnson is also entered.

Saturday will also be the first “Official” American Speed Association Reunion as part of the festivities with the 56th Annual Greg Hubler Automotive Group Redbud 400. Former ASA Series Redbud 400 winners Gary St. Amant and Scott Hansen will be honored at the ASA Reunion. A limited number of VIP passes (including race ticket and hospitality) are available to the ASA Reunion event, which will be held prior to the race.

Redbud 400 ticket and ASA Reunion Party information can be found at www.andersonspeedway.com or by contacting the track at 765-642-0206.

Final Four Owners and Drivers set to Race for the Series Championship at Winchester   Salem, IN (September 25, 2017) – Terry... read more

Salem, IN (October 6, 2016) – Winchester Speedway officials have announced that CSX Play It Safe will be an Event... read more