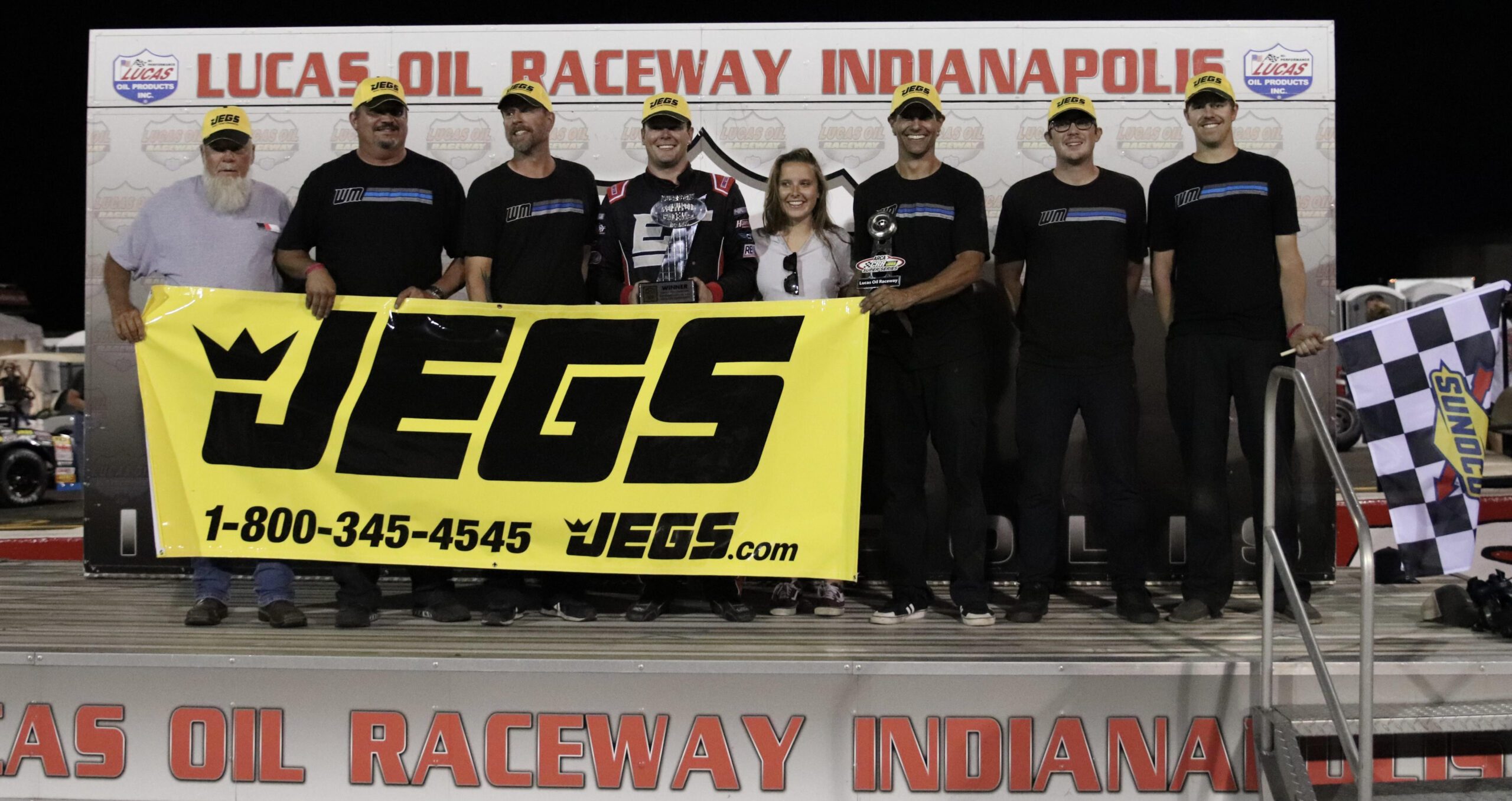 Salem, IN (July 31, 2022) – Former JEGS/CRA All-Stars Tour Champion Erik Jones outdueled fellow NASCAR Cup Series competitor William Byron to grab the win in Saturday night’s Fireball Whiskey Circle City 100 Lucas Oil Indianapolis Raceway Park, in an event that featured great racing action through out the field for all 100 laps. Jones got past Byron on a lap 32 restart and held off several challenges from Byron to grab his eighth all-time victory with the ARCA/CRA Super Series Powered by JEGS and his second triumph in the Circle City event.

“That was a lot of fun”, remarked a very happy Jones in victory lane. “This is such a great place to race, there are so many different groves that you can use to make your car work. William defiantly put the pressure on us, especially on the restarts, but I was able to make the high groove work and we got the win. I want to thank Wimmer Motorsports for giving me a great car and all their hard work to do this deal. I really enjoy racing these Super Late Models and this win comes at a great time!”

Jones added, “We knew we had to really step up our game to beat those guys. William’s a great driver, their whole team does a great job, but today we were able to step up and get it done! I’m looking forward to what we can do in the future with this team!”

Byron used his outside pole starting position to grab the early lead from Quinnton Bear with Jones and Carson Hocevar also grabbing early spots behind Byron. Jones managed to get the pass done on the lap 32 restart with the two racing hard for position for several laps. Jones and Byron continued that battle on restarts on lap 73 and lap 78 after cautions stopped the action both times. On each restart Byron looked like he could use the bottom grove to make the pass, but Jones would use his momentum on the top to hold off the attempts by Byron, even after racing side by side for several laps, with both drivers showing why they both race on Sundays in the NASCAR Cup Series. Jones would go on to get the win over Byron by just a little over a second and picked up the AR Bodies Cool, Move of the Race Award for holding off Byron’s pass attempts.

Veteran Michigan driver Brian Campbell would battle hard for position in the top five throughout the event coming home in third place and earning the FLUIDYNE Cool Under Pressure Award. Sammy Smith would come back from losing a lap after having to make an unscheduled pit stop when his car began to smoke heavily from a loose oil line fitting. Smith would get back on the lead lap with a free pass and battle his way back to a fourth-place finish earning a Hoosier Racing Tire Performance Award.

Hocevar would make a late pit stop under yellow after battling hard with Campbell for position where his team made several adjustments, Hocevar would use the low grove to race his way back to get a hard earned fifth place finish, almost in the grass on the bottom of turns one and four. The TK Racing Team picked up the PitBoxes.com Pit Crew of the Race Award for their efforts in getting Hocevar back on the track in a very competitive car.

Chase Burda and series points leader Eddie Van Meter battled hard over the closing laps for the sixth position with both drivers using two totally different groves. Burda would hold on to get sixth with Van Meter in seventh. Van Meter picked up the Progressive Racing Engines Hardcharger Award and a Hoosier Racing Tire Performance Award after coming from his 17th place starting position to finish seventh.

Scotty Tomasik would finish in eight, series top rookie Billy Van meter would finish in ninth with Tommy St. John finishing in tenth. St. John picked up the Sweet Manufacturing Sweet Move of the Race Award for a miraculous save when his car got loose and sideways coming out of turn four late in the event.

The next ARCA/CRA Super Series event will be the Racetrack Revival event at North Wilkesboro Speedway on Friday and Saturday, August 12th and 13th, that event will be co-sanctioned by the Southern Super Series. More information on all the CRA Series is available at www.cra-racing.com.

Special from Speed51.com - Brian Campbell does not make a habit of traveling outside the Midwest to race anymore, preferring... read more