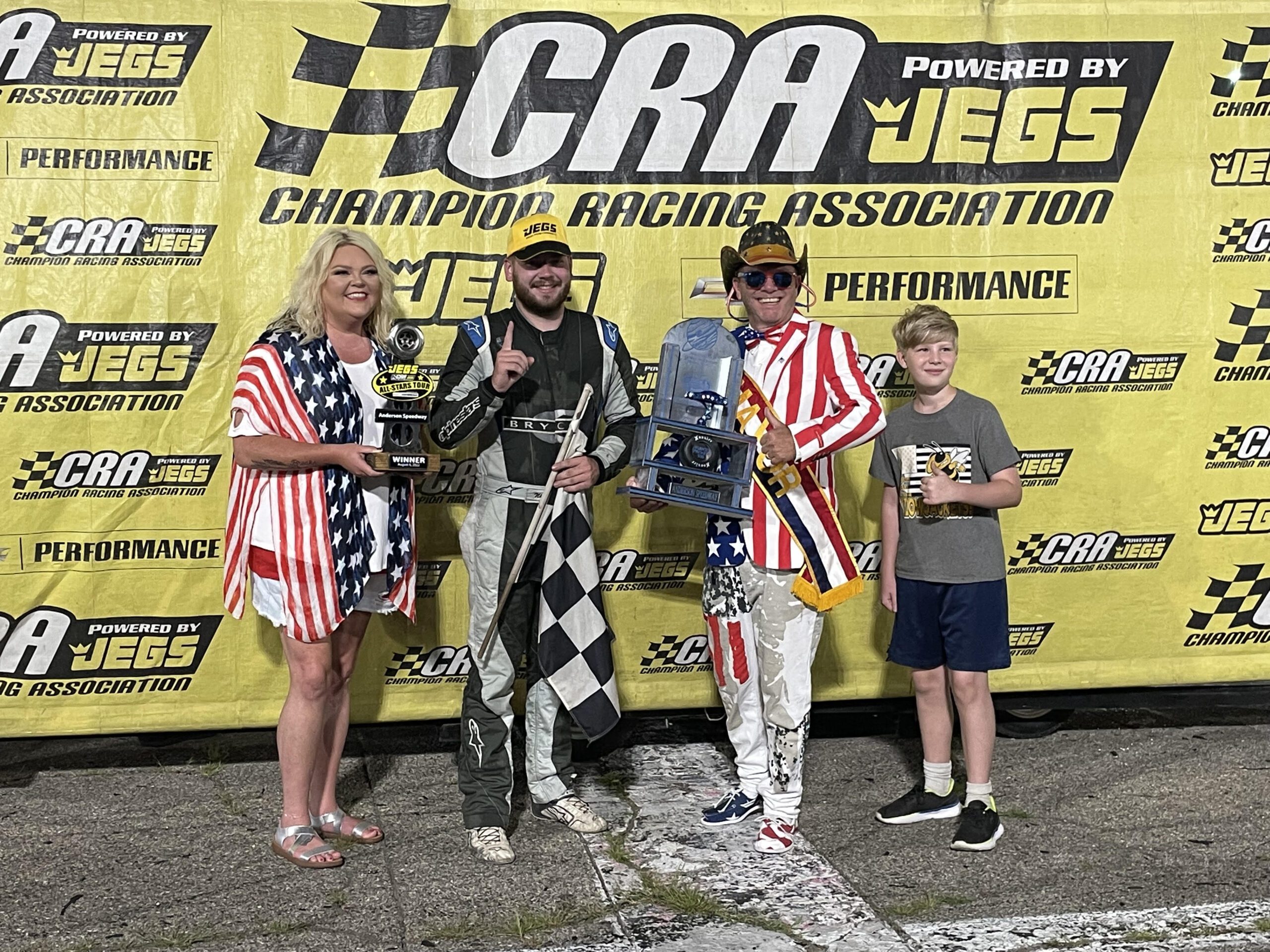 “The is great to get our first series win here at Anderson Speedway,” remarked a very happy Naugle in victory lane. “We knew we had a fast car today, we were fastest in practice, didn’t qualify as well as we wanted, but we were patient and worked our way to the front and things just worked out for us to be able to race for the win today. I have to thank my Crew Chief Butch VanDoorn and my whole team for their hard work today and giving me a great racecar. I thought our day may have been over on the restart after the lighting delay when we got some air when we made some contact with the 47 car, but it didn’t hurt the car and we were in a position to race the 5 and get by and get the win.”

Robinson got the early lead at the drop of the green flag from his pole starting position after Nova Motorsports Fast Qualifier Dakota Stroup drew a five for the event’s inverted start. Robinson led until lap 21 when contact from Ethan Stadniczuk got Robinson a little sideways leaving the bottom open for Stadniczuk, who was the only series event winner in the field prior to the race, to grab the lead.

The event’s first yellow flag flew on lap 20, then the track went red to clear the stands with lightning in the area.

After a 45-minute delay the race resumed with the lap 21 restart with Robinson powering by on the outside to grab the lead back from Stadniczuk with Stroup also getting by to take second. Stroup started to track down Robinson as the two had separated themselves just a little from the rest of the top five when the event’s second caution flew on lap 55 after two cars spun on the backstretch.

The third caution flew on the restart when three cars wrecked coming out of turn four when Stroup’s car had the field stack up behind him when his car lost power. The track went red for track cleanup as the night was over for Hunter Wright, James Krueger and Kevin Cremonesi because of damage. Stroup’s car was pushed to the pits as the crew tried to get the engine to fire up.

Robinson again kept the lead on the third lap 55 restart, but the yellow flew again for another incident on the backstretch between Nick Egan and Zach Johnson.

Robinson grabbed the lead on the fourth lap 55 restart, but Naugle had worked his way to second and closed quickly on Robinson’s bumper. Naugle made his move and took the lead on lap 58, the event would go all green to the checkers from that point with Naugle picking up the win. Naugle picked up the AR Bodies Cool Move of the Race Award for his pass to get the lead.

Robinson finished in second place, his best ever series finish. Dylan Bates came from his 10th place starting position to finish in third after a late pass of Stadniczuk and earned a Hoosier Racing Tire Performance Award. Stadniczuk finished in fourth with Jimmy Tucker coming back from the tail of the field to finish in fifth place and earned the FLUIDYNE Cool Move of the Race Award.

Egan would battle back from a lot of damage to finish in sixth place with his crew being awarded the PitBoxes.com Pit Crew of the Race Award for their hard work to get Egan back on track. Joey Strode came from his 13th place starting position to finish in seventh and also earned a Hoosier Racing Tire Performance Award.

Special from Speed51.com - A poor qualifying effort led to a sensational charge, as Casey Roderick stormed through a stout... read more