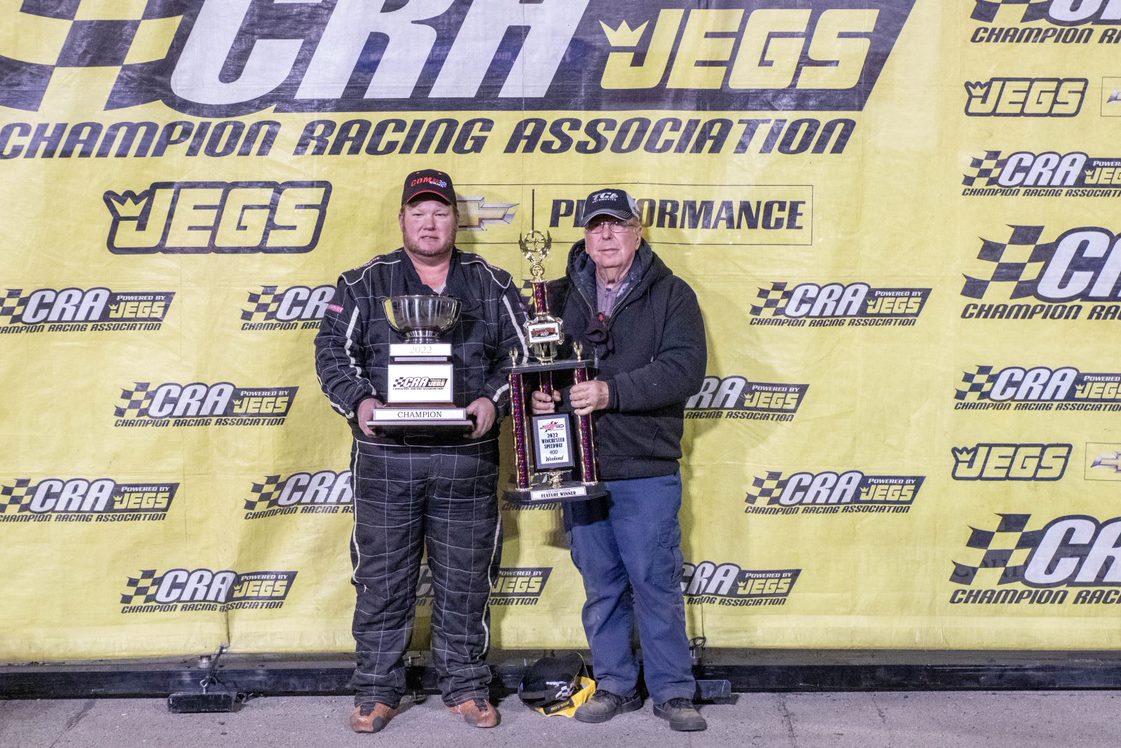 Salem, IN (October 18, 2022) – New Castle, Indiana’s Jason Atkinson took the lead on lap 28 and never looked back in claiming the win in Saturday night’s 40 lap Van Hoy Oil CRA Street Stocks Powered by JEGS Season Championship event on the famous High Banks of Winchester Speedway, as part of the huge Winchester 400 Weekend Presented by Vore’s Welding & Steel. With the win, Atkinson was the highest finishing of the four Chase for the Championship drivers earning him his fourth series Championship.

“It feels pretty good to get the win tonight and to get the Season Championship with the win,” remarked Atkinson in Victory Lane. “We didn’t have the season we had last year, won the series points opener at Shadybowl, and we didn’t get another win until tonight. This is a good group of racers to race against each event, nothing comes easy. I have to thank my car owner Danny Acrey, he’s the one who makes all this possible. Danny and our team just worked really hard getting ready for this race and things worked out in our favor. Once we got the lead, I felt like we had a good shot to win. It was fun racing with the 89 car, he’s a tough racer like most of these guys out here.”

JJ Schafer grabbed the early lead from his pole starting position after Allstar Performance Fast Qualifier Sage drew a six for the event’s inverted start. Atkinson closed quickly into second place and couldn’t make a lot of ground up on Schafer when the yellow flag flew on lap 27 after Schafer spun by himself in turn two.

Atkinson took over the lead and held off the hard charging Sage to get the win by under a half second. With his two wins during the 2022 season, Atkinson’s all-time series wins total is now 23, his closest competitors to that mark are Jeff Lane and Josh Poore with 14 apiece. Atkinson is also the all-time series Championship leader with his four Championships.

Sage would finish in second. Series rookie and Chase for the Championship competitor Blaine Akin made some great moves on the final restart to get a third-place finish and second in the series Season Standings and was the series 2022 Rookie of the Year. Akin was awarded the AR Bodies Cool Move of the Race Award for his late event position battles.

Regular Season series Champion Dalton Conner would fight hard for a fourth-place finish just behind Akin. The Chase for the Championship driver finished third in the series’ final standings. Laporte, Indiana’s Austin Woodcox would finish in fifth place in a rare series start. Chase for the Championship driver Andrew Teepe finished in sixth place after battling back from being involved in an early caution that damaged his car. Teepe was the series wins leader in 2022 with three total, including the series previous two races leading up to the Season Championship event.

Plans are underway for the 2022 CRA Awards Banquet and the 2023 season, stay tuned for future announcements on those.

Dalton Sargeant had a strong run, finishing third in the 45th Running of the Winchester 400. Sargeant posted a short... read more

Condolences To The Family Of Jeff Richardson

CRA would like to send out our condolences to the family of Jeff Richardson who passed away suddenly last night. ... read more

Salem, IN. (April 20, 2018) – Champion Racing Association Powered by JEGS Officials have released the entry form for the... read more