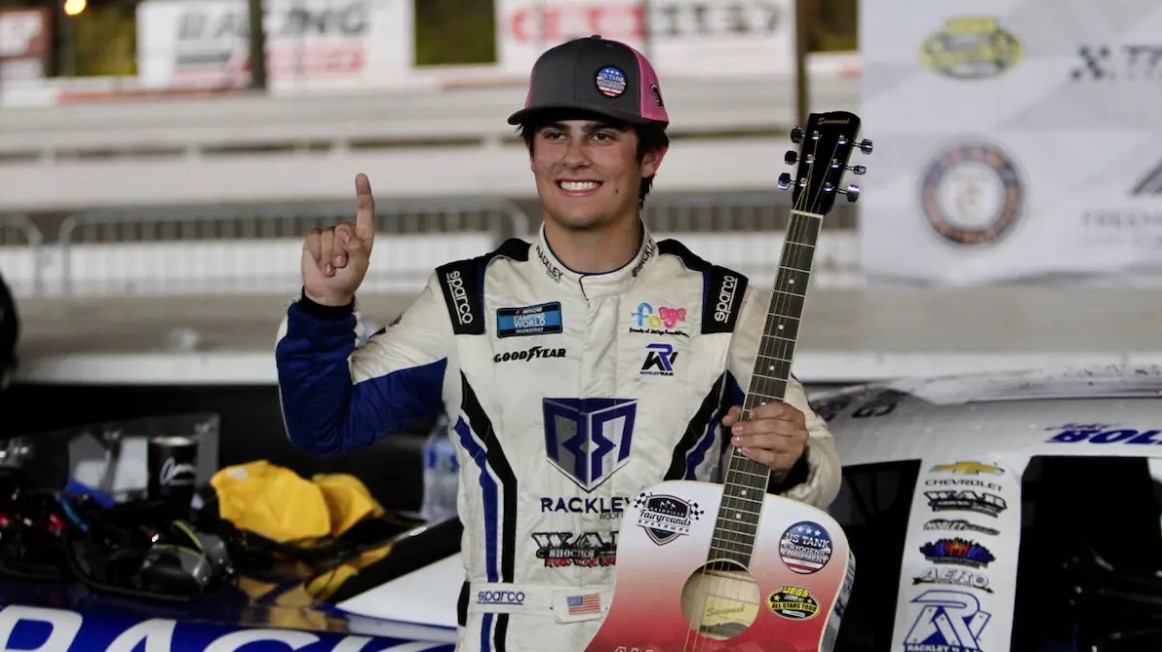 On a lap 98 restart in the 100-lap Pro Late Model feature of the All American 400, Jackson Boone and Cole Williams came together exiting turn two. After making contact down the length of the backstretch, Williams spun into the wall.

Boone was also shown the black flag by race officials due to the damage sustained by his car in the incident, at which point he and his team parked for the evening.

A frustrated Cole Williams shared his displeasure with the outcome.

“I got right-reared, that’s what happened,” Williams told Racing America. “Don’t get me wrong, we were racing hard. We were running tight with each other. When you get on the guy’s right rear coming off the corner and stays on it the whole time. You don’t give the guy an opportunity to even turn down. He just hung on my right-rear and finally finished me off.

“Just no respect. He’s been like that the last couple of times at Pensacola. He did it to me, drove it through my inside. Jackson’s a good racer. I don’t expect that out of him, but I lost a lot of respect for him tonight.”

Boone chalked up the incident to hard racing, feeling squeezed by Williams exiting turn two but not wanting to back out of the fight so late in the race.

“We were just racing for the win. Coming off the corner, I don’t know if his spotter cleared him or if he cleared himself, but I was at his door or at worst his right-rear. He kept on coming up and I got put in the wall. I let it go for half a second or so but he kept coming up. At that point, I stayed in it. You’re racing for the win. At the end of the day, it’s short track racing. Stuff’s going to happen.

“It wasn’t intentional. It has nothing to do with Rackley or me wrecking Cole Williams, I respect them. It happens. That’s part of short track racing. You can’t just give away room or give away a nose at the end of the race.”

With Boone and Williams out of the running, Bollman held off Chase Johnson and Dylan Fetcho for his first career Pro Late Model win at the Nashville Fairgrounds.

“I knew I had to get a good restart,” said Bollman in victory lane. “The car was really good all night. I was just trying to be patient. I didn’t want to burn the tires up in the beginning.

“They were racing pretty hard,” added Bollman regarding the Boone-Williams incident. “I mean, they probably shouldn’t have. They had five laps or so to battle it out. It looks like Jackson just got a little carried away and wrecked him.”

“It’s definitely not easy,” said Fetcho. “Especially starting as far back as we did. Qualifying hurt us, so we missed the invert. I knew it was going to be tough. I just took the whole 100 laps, took my time and got up there slowly.”