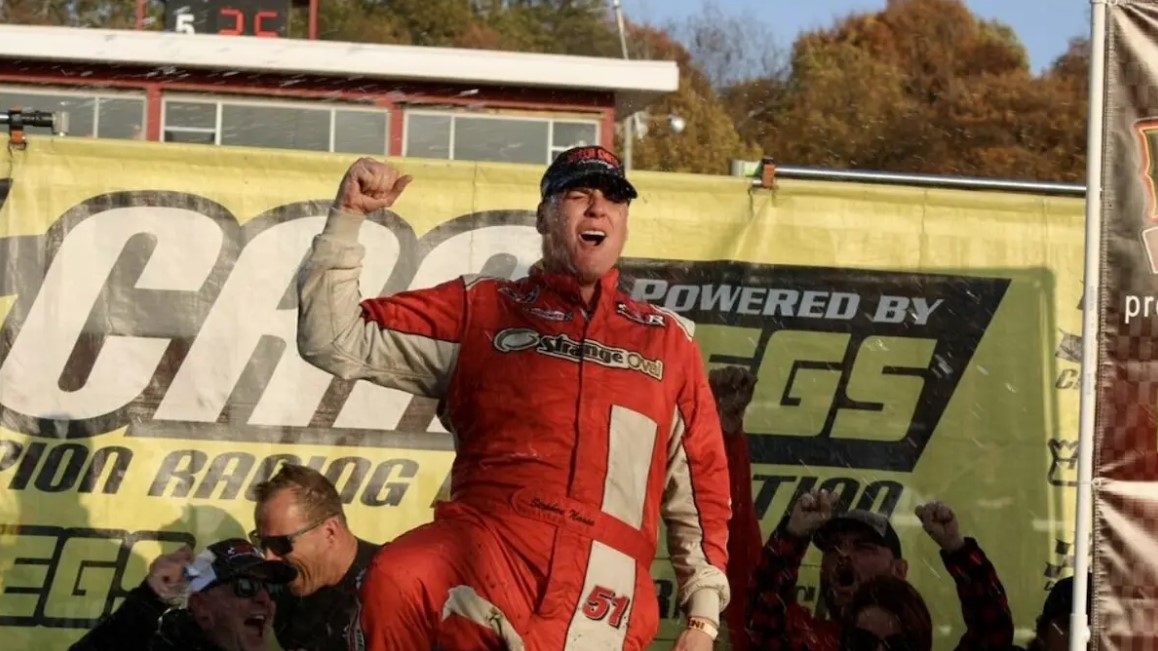 Special from Racing America – Stephen Nasse really needed a victory like this in the Winchester 400 but he was really made to earn it.

The 27-year-old from Pinellas Park, Florida overcame two flat tires, one that resulted in a spin and the other forcing him off the lead lap, all to drive twice back through the field and survive his way to a dramatic battle for the win with Jake Garcia.

“It was a wild one, a long one for sure with those tire problems,” Nasse said after the race. “Fortunately, the timing was about as well as they could have been. I don’t usually get those lucky breaks. I was able to change those tires without losing too much track position.

“The first time we lost a lap, but I think we made the right adjustments and I love these long races, they’re about longevity, and everything worked out in our favor this time.”

It’s been a challenging summer for the Nasse family, having swapped back to Jett Motorsports from their own in-house program with Jeff Nasse taking over crew chief duties, but really starting to hit their stride as of late.

The Nasses won the Southern Super Series finale at Five Flags Speedway on September 24 and now picked up their second rifle trophy from the World’s Fastest Half-Mile.

“I’ll tell you what, I’m really happy because this is a big deal race,” Nasse said. “This is my favorite race track, and it’s always special to come here for this race and to win it is special, so I’m going to be riding this high for the next few weeks.”

It took roughly two dozen laps to complete the pass, but Nasse methodically worked over leader Jake Garcia before taking the lead with 35 laps to go. That was the 12th lead change and Nasse accounted for three of the lead changes.

Having used up his tires fending off Nasse, Garcia faded to fourth over the closing laps.

But that battle was reflective of how different the two different Winchester 400 wins were for Nasse. The first came in dominant fashion, leading all but eight laps, but this one was a grind.

“This one was hard fought,” Nasse said. “The first one, we got away with leading 392 of the laps, but this one, with the tires going down and getting stuck (after spinning) in 3 and 4, I thought we were screwed. So, to come back from that makes me even happier.”

Defending winner Sammy Smith was charging through the field on the closing laps but came in contact with Casey Roderick for a second time, stalling his progress, and causing the margin of victory to fall to 4.623.

But Smith overcame a flat tire due to contact with Roderick and falling several laps down to survive to the end and have a chance to race for the win. That’s how the game is played, won and lost at Winchester Speedway.

“It was an overall good day,” Smith said. “We had a winning car before I had a left front tire go down. I hit Casey and the wheel got jerked out of my hand and spun into the infield. But I’m glad we could come back from a lot of different things that happened — some bad parts in the right front. We came from a lap down and it was a good day.”

By virtue of his eighth-place finish, Eddie VanMeter captured the CRA Super Series championship but it too was the result of adversity and survival.

“It sounds pretty good to me,” VanMeter said. “I thought we had a pretty good car at the start before me and the 5 got together and sent me into the fence, knocked the right front off and fought that all day.”

The most notable moment before the finish occurred when Chandler Smith crashed from contact with Garcia while battling for the win, completely destroying the Anthony Campi Racing No. 81 Toyota Camry.

In protest, Smith grabbed a piece of debris from his car and dropped it in front of the Garcia pit box, igniting a shoving contest with crew chief Ricky Turner and company. It’s worth noting that Smith once worked with Turner when emerging as a Pro Late Model prospect several years ago.

Smith declined to comment on the matter, offering that nothing positive would come from it.

“I was just running my line and trying to hold him off from the top as long as I could,” Garcia said. “I gave him the bottom thinking he would get pinched. I think he got loose, washed up and got into my left rear and spun in the wall. I was already up against the wall and couldn’t do much different.”